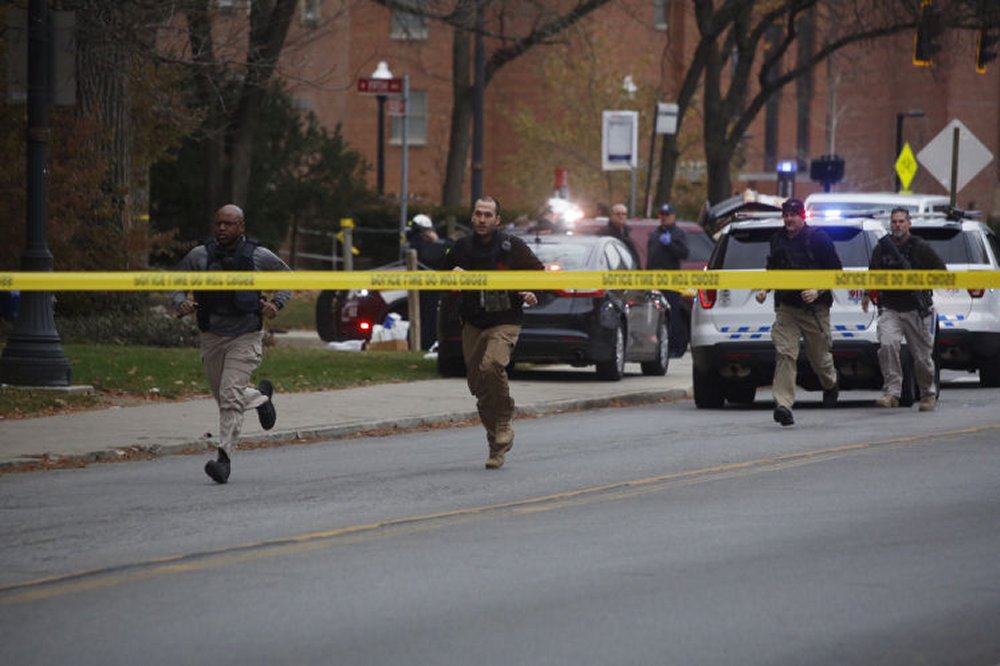 A business student at the Ohio State University injured as many as 11 people Monday when he steered his vehicle off the road and into a group of students — then jumped out and slashing some of them with a butcher knife, authorities said.

The attack happened around 10 a.m. and triggered a lockdown at the central Ohio campus.

According to police and witnesses, the attacker ran his car off the road in front of the Watts Hall building and struck several people standing in the courtyard — who had been evacuated for a reported gas leak a short time earlier.

A campus police officer, Alan Horujko, was already in the area due to the reported leak and witnessed the attack. Just seconds after it began, officials said, Horujko shot the suspect dead when he refused to drop the knife.

“We are very fortunate that an OSUPD officer was there and took quick action,” campus police Chief Craig Stone said Monday afternoon.

The attacker was identified by police as Abdul Razak Ali Artan, a business undergraduate student at the university.

Investigators are still trying to determine a motive for the assault.

A rant was posted on Artan’s Facebook page prior to the attack, NBC News reported.

“We prepare for situations like this but we hope we never have one,” OSU President Michael Drake said.

“Our top priority remains the safety and security of our campus community. Our thoughts and prayers are with those injured and their families,” the school said in a statement. “Victim injuries include stab wounds, injury by motor vehicle and other injuries that are being evaluated.”

After announcing the campus was secure and lifting the lockdown, the university said all classes were canceled for the rest of the day.

Artan, 18, graduated with honors from Columbus State Commuity College in May before transferring to Ohio State, the Columbus Dispatch reported.

Initially, an “active shooter” was reported on the campus but it was later determined that the suspect did not have a gun.

All of the injured people are expected to recover.

Authorities closed in on Artan’s neighborhood after the shooting to interview neighbors and serve a warrant on his home.

“I don’t know what made him act like that,” Jack Ouham, who was casually acquainted with Artan, told the Dispatch. “He don’t drink. He don’t smoke. He don’t use narcotics.”

Incidentally, Artan, a Muslim, was interviewed by the Ohio State student newspaper in August. In the article, he expressed concern about the recent treatment of people of the Islamic faith in the United States.

“This is my first day. This place is huge and I don’t even know where to pray,” he said. “I wanted to pray in the open, but I was kind of scared with everything going on in the media…I was kind of scared right now. But I just did it. I relied on God. I went to the corner and just prayed.”

Trump, Carrier to announce deal to keep 1,000 jobs in Indiana