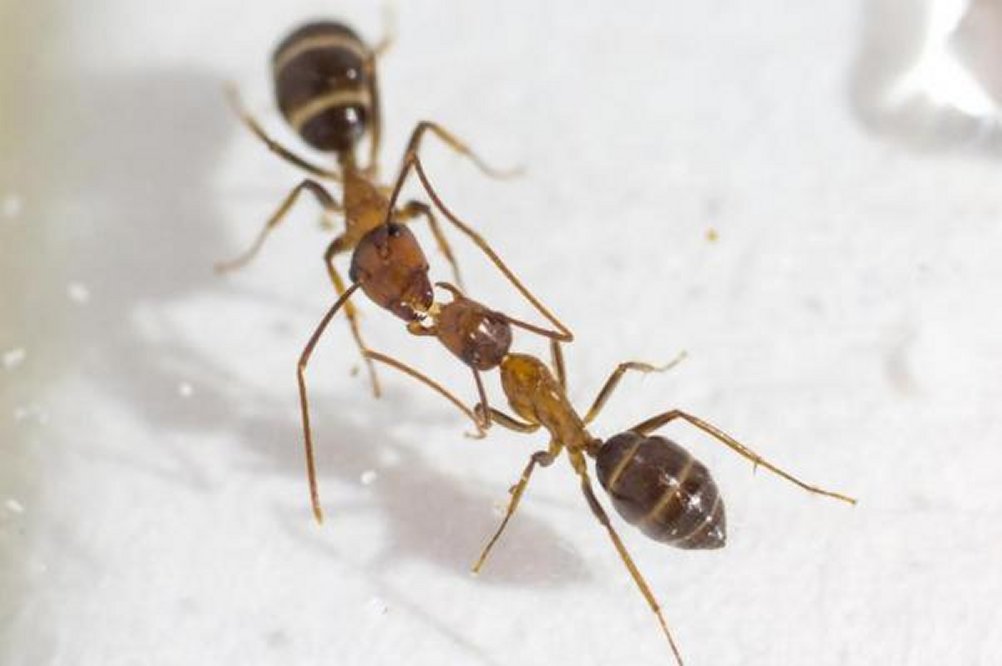 Ants can augment the mix of proteins, hormones and other small molecules traded during trophallaxis to influence the organization of the colony.

“A lot of researchers consider trophallaxis only as a means of food-sharing,” Richard Benton, a professor at the University of Lausanne’s Center for Integrative Genomics, explained in a news release. “But trophallaxis occurs in other contexts, such as when an ant is reunited with a nest-mate after isolation. We therefore wanted to see if the fluid exchanged by trophallaxis contains molecules that allow ants to pass other chemical messages to each other, and not just food.”

Analysis of trophallaxis fluid revealed significant amounts of a protein important to the development of growing ants, as well as heightened levels of a juvenile hormone vital to the regulation of ant development, reproduction and behavior.

When scientists spiked the food of larvae-rearing ants with the juvenile hormone, larvae were twice as likely to reach adulthood.

“This indicates that juvenile hormone and other molecules transferred mouth-to-mouth over this social network could be used by the ants to collectively decide how their colony develops,” said Adria LeBoeuf, a postdoctoral researcher at Lausanne. “So, when the ants feed their larvae, they aren’t just feeding them food, they are casting quantitative ballots for their colony, administering different amounts of growth-promoting components to influence the next generation.”

The new research — detailed in the journal eLife — also suggests chemical cues in trophallaxis fluid help ants recognize one another.

“Overall, we show that liquid transmitted among ants contains much more than food and digestive enzymes,” added LeBoeuf. “Our findings suggest that trophallaxis underlies a private communication channel that ants use to direct the development of their young, similar to milk in mammals.”