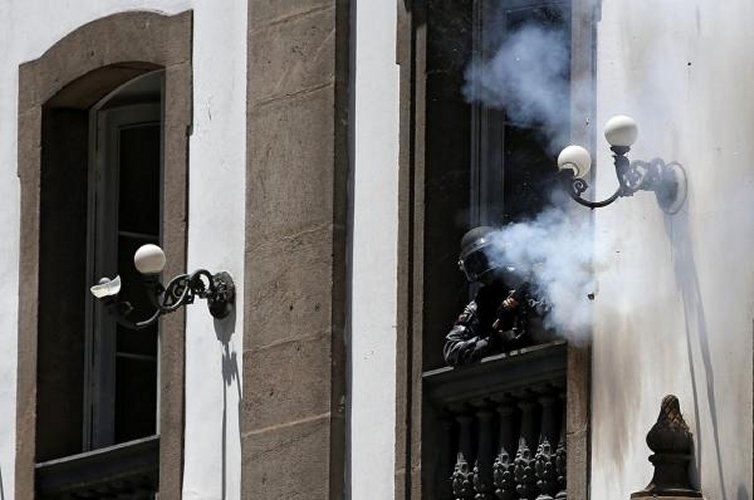 The commander-in-chief of Brazil’s Military Police has apologized to the Metropolitan Archbishop of Rio de Janeiro after officers shot at protesters with rubber bullets from within the historic Church of Saint Joseph.

Police on Tuesday clashed with demonstrators who were protesting against proposed austerity measures that would largely affect Brazil’s retirees, pensioners and public servants — including police, firefighters and prison officers — by cutting future pay and deferring, or cancelling, unpaid wages.

“The main reason for me coming here is to formalize an apology from the Military Police … regarding yesterday’s episode. We find it regrettable that a sacred temple was, as the images showed, at first, invaded,” Dias said following the meeting. “Of course that was a tactical decision, taken in the heat of the situation, in which policemen were at risk, being shot by stones, fires and bombs. At that moment, a decision was made, which we are studying and listening to the police officers involved. But the episode itself is unfortunate. We are making efforts to prevent a new episode like this from happening again.”

A spokesman for the Military Police said the officers’ entry into the church was allowed by church officials, though adding that “we regret that the church, a temple of 410 years, was part of this scene of violence.”

Church officials said an investigation is ongoing. In a statement, the Archbishop said that “resorting to violence is never a solution.”

“Effective solutions spring from solidarity, dialogue, and sacrifice,” Tempesta wrote. “If the problems are great, our capacity for tireless dialogue, the strength of our solidarity, and the care that the poorest will not be even more burdened with a disproportionate amount of sacrifice, should be greater.”