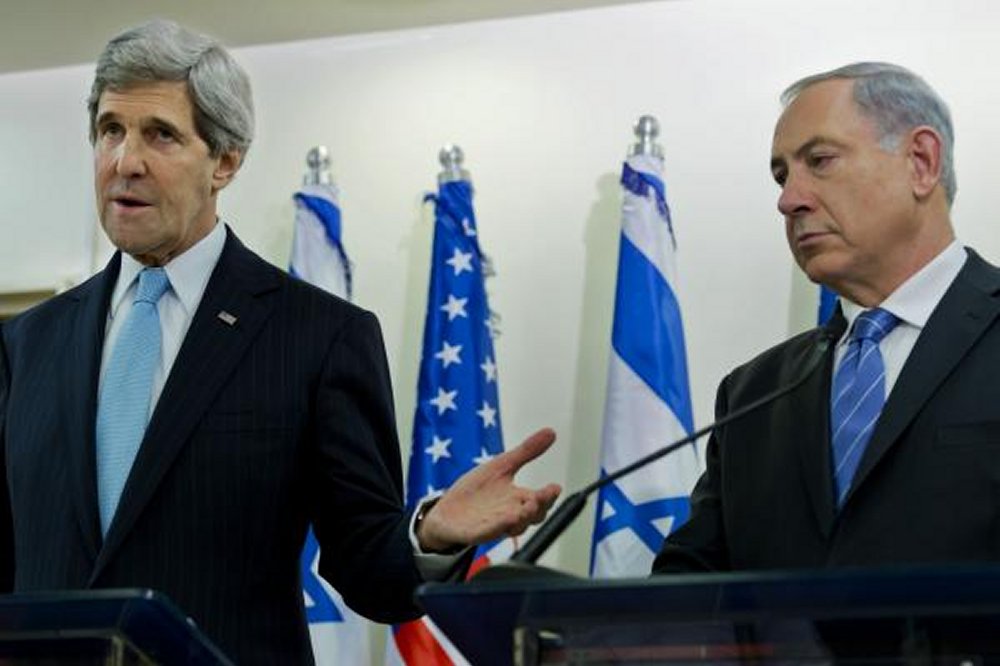 Kerry, whose appointment ends once President-elect Donald Trump is inaugurated on Jan. 20, said Israel could not survive both as a Jewish state and as a democratic country with a growing Arab population.

“For more than an hour, Kerry obsessed over the issue of settlements and hardly touched on the root of the conflict — Palestinian resistance to a Jewish state within any borders,” the premier said.

“The status quo is leading toward one state, or perpetual occupation,” Kerry said. “The Israeli prime minister publicly supports a two-state solution, but his current coalition is the most right wing in Israeli history, with an agenda driven by its most extreme elements … The result is that policies of this government — which the prime minister himself just described as ‘more committed to settlements than any in Israel’s history’ — are leading in the opposite direction, toward one state.”

Palestinian President Mahmoud Abbas, responding to Kerry’s speech, “reiterated his commitment to a just and lasting peace as a strategic option,” in a statement read by Palestine Liberation Organization’s general-secretary, Saeb Erekat.

“The minute the Israeli government agrees to cease all settlement activities, including in and around occupied East Jerusalem, and agrees to implement the signed agreements on the basis of mutual reciprocity, the Palestinian leadership stands ready to resume permanent status negotiations on the basis of international law and relevant international legality resolutions, including UNSC 2334, under a specified timeframe,” the statement said.

On Friday, the 15-member United Nations Security Council voted 14-0 to pass Resolution 2334, a condemnation of ongoing construction of Israeli settlements in disputed Palestinian territory, including East Jerusalem. The United States abstained from voting.

“We did not take this decision lightly,” Kerry said of the U.N. vote, adding that a two-state solution is necessary for “lasting peace” in Israel.

Issac Herzog, the opposition leader in Israel’s parliament, was supportive of Kerry’s stance.

“John Kerry has always been a great friend of Israel and will always be. His speech expresses true concerns about Israel’s well-being & future,” Herzog wrote on Twitter.

Education Minister Naftali Bennett, the leader of the pro-settlement faction in the Knesset, said after Kerry’s speech that Israel should not support the establishment of a Palestinian state.

“If it was up to me, we would not allow the establishment of another terror state in the heart of the country,” Bennett said.

Trump on Wednesday urged Israel to “stay strong” until his administration takes office.

“We cannot continue to let Israel be treated with such total disdain and disrespect. They used to have a great friend in the U.S., but … not anymore,” Trump tweeted. “The beginning of the end was the horrible Iran deal, and now this (U.N.)! Stay strong Israel, January 20th is fast approaching!”

Leaders plan to convene in France on Jan.15 to discuss peace in the Middle East. Abbas said Wednesday he will cooperate with France “to guarantee the launching of a credible peace process.”

Neither Israel nor the Palestinians were invited and Israel refused to meet with Abbas during the conference. Israel wants only one-on-one negotiations with the Palestinians for a peace plan and Abbas won’t participate in direct talks unless settlement construction ends.