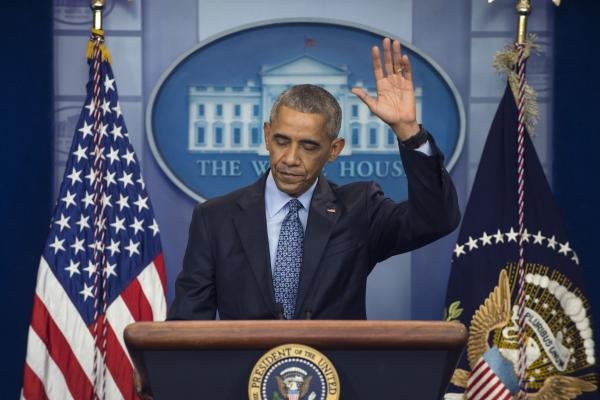 For the last time, President Barack Obama on Wednesday stood at the White House podium and took a variety of questions about his sentiments after eight historic and challenging years as commander in-chief.

Obama, who officially leaves office Friday, started the news conference in the James Brady White House Press Room by thanking and praising reporters for their treatment of him for eight years — noting that he understands it’s the news media’s responsibility to ask tough questions and hold his administration accountable.

“I have offered advice that I thought was pretty sound, like don’t do stupid stuff,” the president said in his opening remarks. “And even when you complain about my long answers, I just want you to know that the only reason they were long was because you asked six-part questions.”

Obama addressed a range of issues.

Asked whether he thought granting clemency to whistleblower Chelsea Manning might signal to other potential leakers that similar actions won’t draw a severe punishment from the government.

“Let’s be clear. Chelsea Manning has served a tough prison sentence,” Obama said. “Given [that] she went to trial, that due process was carried out, that she took responsibility for her crime … it made sense to commute, and not pardon, her sentence.”

Manning has been in jail since she pleaded guilty to several charges and was convicted on nearly two dozen more in 2013. In recent weeks, she has appealed to Obama to grant her relief from her punishment at the U.S. Army prison in Kansas.

Relations with Russia have dominated headlines for weeks.

“I think it is in America’s interest and the world’s interest that we have a constructive relationship with Russia,” Obama said, responding to whether he favors lifting economic sanctions against Vladimir Putin’s government if Moscow reduces its nuclear weapons stockpile.

Russia has taken heavy fire recently for accusations by the U.S. intelligence community that the Kremlin actively interfered in the presidential election to get Donald Trump elected. Moscow has also sparked tensions with other actions, such as annexing Ukraine’s Crimean Peninsula two years ago.

“Russia continues to occupy Ukrainian territory and meddle in Ukrainian affairs and support military surrogates,” Obama said. “It is important for the United States to stand up for the basic principle that big countries don’t go around and invade and bully smaller countries.”

On Democrats’ opposition to Trump

Obama was asked how smoothly the transition of power to Trump’s administration has been, and whether he supports Democrats who have said they plan to boycott Friday’s inauguration.

“I have offered my best advice .. both foreign and domestic,” he said. “My working assumption is that having won an election, opposed to a number of my initiatives and certain aspects of my vision for where the country needs to go, it is appropriate for him to go forward with his vision.”

Trump has spearheaded Congress’ activity to repeal the Affordable Care Act, Obama’s signature healthcare law, enacted in 2010 — a move that some critics say could and leave nearly 18 million Americans without medical coverage.

“All I know is I’m going to be there. So will Michelle,” the president said of Friday’s inauguration, refusing to comment further on a possible Democratic boycott.

“I continue to worry about the Israeli-Palestinian issue,” Obama said, answering a question about the U.N. Security Council’s recent resolution against Israeli settlements in Palestinian territory — a resolution Obama’s administration did not veto, as it had in the past.

“The status quo is unsustainable. It is dangerous for Israel. It is bad for Palestinians. It is bad for the region and it is bad for America’s national security,” he added. “We cannot force the parties to arrive at peace. What we can do is facilitate … but we can’t force them to do it.”

“What we did as an administration was to help the society to move in a better direction,” Obama said of the strides his presidency made for the gay and lesbian community, particularly the legalization and protection of same-sex marriage.

“None of that would have happened without this incredible transformation that was happening in [American] society,” he continued. “I don’t think it is something that will be reversible.”

On being the first black president

To punctuate his feelings, he pointed to the success of Team USA at the Summer Olympic Games in Brazil last summer — and noted the vast diversity of the American athletes who participated and won medals.

“It’s important for me to take some time to process this amazing experience that we have gone thorough,” Obama said, making clear that he has no plans to run for any other political office “anytime soon.”

“I want to do some writing, I want to be quiet a little bit and not hear myself talk so darn much,” he continued. “Those are my priorities this year … I’m still a citizen.”

Obama mentioned that his 25th wedding anniversary is coming up and expressed hope that the first lady will “re-up” and “put up with” him for a while longer.

Nikki Haley breaks with Trump on Russia: ‘I don’t think we can trust them’

Tom Price: GOP goal not to take insurance away from Americans