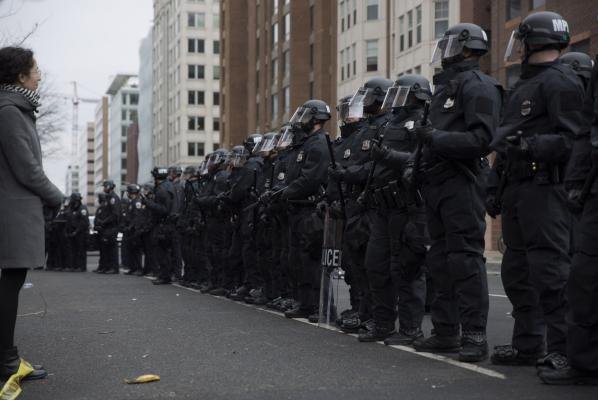 More than 200 people were arrested in Washington, D.C., Friday — as well as dozens more across the United States — following scattered protests against President Donald Trump that turned violent.

In the nation’s capital, authorities said at least 217 people were arrested and charged with rioting for disruptive conduct that included throwing objects, breaking windows and even setting a limousine on fire.

The demonstrations caused what police called “significant damage,” and resulted in the injuries of six Washington, D.C., police officers. Three received head injuries after they were struck by thrown objects, Washington, D.C., Metro Police Chief Peter Newsham said late Friday. All of their injuries, though, are not life-threatening.

“Unfortunately, a small group of people have engaged in vandalism as well as violence against our law enforcement officers,” Washington Mayor Muriel Bowser told reporters Friday evening. “This type of violence against people in Washington, D.C., will not be tolerated.”

Many of those arrested will be charged with rioting for the demonstrations, some of which carried over from Thursday night.

Various protesters who identified themselves as anarchists, anti-capitalists, anti-fascists, as anti-Islamophobes, as well as members of Black Lives Matter, descended on the nation’s capital with a shared, anti-Trump purpose.

In some parts of Washington on Friday, protesters slowed down or stopped the advance of pro-Trump supporters seeking to enter the National Mall to observe the swearing-in.

“Shut it down!” some protesters, who identified themselves as members of Black Lives Matters and who temporarily shut down an entrance, said at a checkpoint in John Marshall Park, The Washington Post reported.

“We drove 20 hours and now we can’t get in,” one Trump supporter said. “Everyone should have just brought guns and had it out, I’d be happy if they just dropped a bomb on them.”

In one violent incident, protesters smashed windows near Franklin Square in downtown Washington, D.C. The protests began on Thursday.

Other demonstrations were staged in other cities on Friday.

In San Francisco, several demonstrators were arrested for disrupting the peace. Eight were taken into custody for chaining themselves to the front doors of ridesharing company Uber headquarters — because its CEO, Travis Kalanick, is an adviser to Trump.

“As a company we’re committed to working with government on issues that affect riders, drivers and the cities where we operate,” the company replied in a statement. “Just as we worked with the Obama Administration, we’ll work with the Trump Administration, too.”

Protesters also interrupted public transit service in the city and the offices of U.S. Immigration and Customs Enforcement.

Donald Trump sworn in as 45th president of the United States