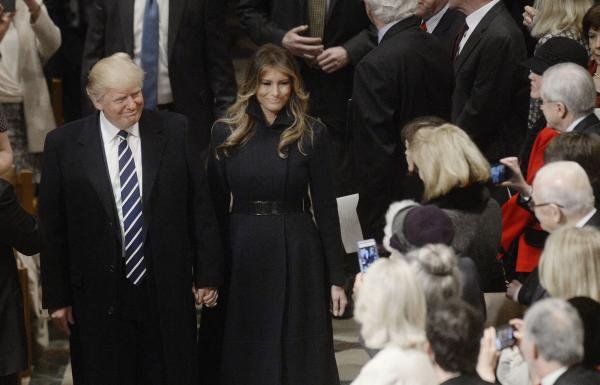 President Donald Trump began his second day as president by participating in an interfaith prayer service at the Washington National Cathedral before visiting CIA headquarters.

Trump and first lady Melania Trump entered the cathedral in Washington D.C. at around 10:30 a.m. Saturday where they joined more than 25 clergy men and women from across the U.S. who represented nine different faiths including Christianity, Judaism, Hinduism and Islam to offer prayers for the nation, the New York Daily News reported.

The Very Rev. Randolph Marshall Hollerith, the Dean of Washington National Cathedral, opened the service by offering a prayer promoting a message of unity following Trump’s divisive presidential campaign, according to CNN.

“Look with compassion on the whole human family; take away the arrogance and hatred which infect our hearts; break down the walls that separate us; unite us in bonds of love; and work through our struggle and confusion to accomplish your purposes on earth; that, in your good time, all nations and races may serve you in harmony around your heavenly throne through Jesus Christ our Lord,” he said.

Trump, who was not scheduled to speak at the service, sat quietly as clergy members led prayers. At the same time, thousands gathered outside the White House to support equal rights in the Women’s March on Washington.

Trump is expected to continue his first full day in office by visiting the CIA’s headquarters in Northern Virginia on Saturday afternoon.

“POTUS to visit CIA this afternoon. Event is over capacity at 300+ Excited to thank the men and women of the intelligence community,” Trump’s Press Secretary Sean Spicer wrote on Twitter.

Trump has been openly critical of the CIA and other intelligence agencies regarding the reports of Russia’s hacking of Democratic Party emails to interfere with the 2016 election.

Before the visit Spicer told the Washington Post the president was “humbled” by the sacrifices of the agencies despite any disagreements.