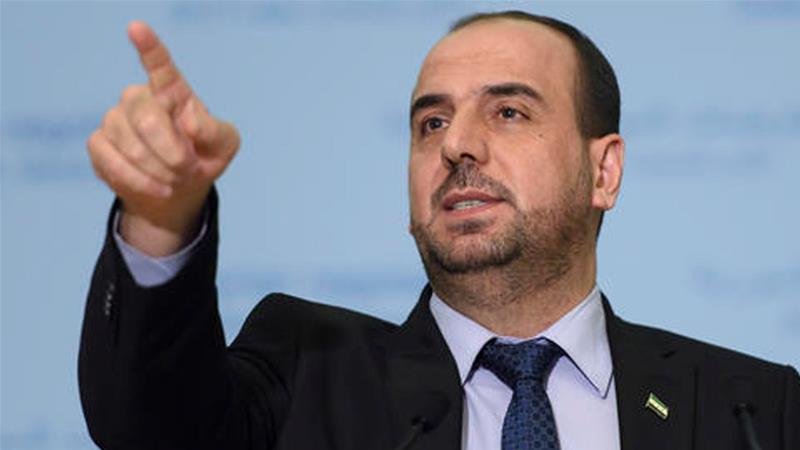 Syria’s main opposition group has urged Russia to put pressure on the government of President Bashar al-Assad to shore up faltering efforts to end the conflict.

The rebels’ comments on Monday at a fourth round of UN-backed talks in Geneva came as a ceasefire at home fell apart.

The High Negotiations Committee (HNC), the main opposition group at the UN-sponsored talks, said it expects to meet a Russian delegation on Tuesday in the Swiss city.

“We hope … that we will see real, positive and constructive support to the political process,” said lead opposition negotiator Nasr al-Hariri after holding talks with Staffan de Mistura, the UN special envoy for Syria.

“We hope … to see support [from Moscow] for the peace process which will ultimately lead to peace by putting pressure on the regime.”

Hariri’s comments came on the heels of the opposition’s second meeting with de Mistura in Geneva.

“[Moscow] has tried to be neutral,” Hariri said. “The fact that it has recognised [moderate rebel factions] as a negotiating party is an indication of Russia’s openness and we are hopeful that tomorrow’s meeting is also a positive indication.”

He said the HNC had presented de Mistura with a proposed agenda and two memoranda of understanding that dealt with the “catastrophic humanitarian situation” in opposition areas and ceasefire violations that have taken place since February 23, when the delegations arrived in Geneva.

Moscow, a central backer of the Assad government, has taken a lead role in the diplomatic process since its air force helped the Syrian army and its allied militias defeat rebels in Aleppo last year, dealing the opposition its biggest loss of the war.

On the heels of multilateral talks in Kazakhstan, the Geneva meetings mark the latest initiative to bring an end to a six-year war that has killed nearly half a million people and displaced more than half the country’s prewar population.

But a fragile ceasefire intended to facilitate the diplomatic process fell further apart over the weekend, as suicide attacks and air strikes threatened to derail the nascent talks.

In a press conference over the weekend, hours after a deadly suicide attack on army intelligence branches in Homs, lead government negotiator Bashar al-Jaafari talked almost exclusively about “anti-terrorism”.

The opposition believes the government’s emphasis on “terrorism” means Damascus is not committed to a real diplomatic process in Geneva.

“The regime must stop its lies. It is the biggest terrorist and it has continued to play the ‘terrorism card’ to delegitimise the revolution,” said Hariri.

“Until this moment, we have not found a serious partner for peace and stability in Syria.”

Air strikes and ground battles have steadily increased over the past month as pro-government forces press offensives on key opposition areas such as besieged East Ghouta in the Damascus countryside, the besieged neighbourhood of al-Waer – the last rebel-held area in Homs – and the province of Deraa in the country’s south.

During Monday’s press conference, Hariri accused the government of killing 1,161 civilians – including 216 children and more than 150 women – since a nationwide ceasefire went into effect on December 30. Al Jazeera was unable to independently verify the figures.

Rebel leader and negotiator Mohammed Alloush, who led talks last month in Astana but has kept a low profile since arriving to Geneva, told Reuters earlier on Monday that the uptick in violence was a sign that the Russians have failed to enforce the truce despite promises from the “highest levels of the Russian delegation”.

While the lineup of Russia’s delegation for Tuesday’s meeting has not yet been finalised, it could include Russia’s Middle East director Sergei Vershinin, who attended the talks in Astana, and possibly Deputy Foreign Minister Gennady Gatilov, who arrived in Geneva on Monday to take part in the annual UN Human Rights Council meeting.

“We sincerely hope to persuade Russia to stand by the Syrian people,” said Hariri. “We hope that Russia will bet on the Syrian people instead of one person who has decided to destroy the whole of Syria so as to remain in power.”

De Mistura, who is charged with keeping the talks alive, has so far met with both sides in separate meetings, and is set to meet again with the government delegation on Tuesday.

While bilateral meetings thus far have primarily covered issues relating to the format of the talks, the UN’s goal is to bring government and opposition delegations together to discuss elements of a “transition” in Syria, including governance, a constitution and elections.

For the Syrian opposition, the only route for lasting peace remains a political transition that ensures Assad’s removal, but the government in Damascus has consistently refused to consider the president’s removal an option.