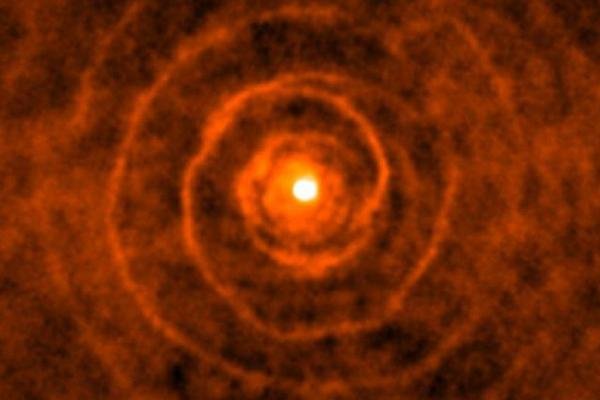 A dying red giant star is playing its final song some 3,400 light-years from Earth. And thanks to the Atacama Large Millimeter Array, a collection of 66 radio telescopes in the Chilean desert, astronomers have a front row seat.

“What we are seeing in splendid detail with these observations is the final act of a dying red giant star, as it sheds most of its gaseous bulk in a strong, outflowing wind,” Mark Morris, a professor of physics and astronomy at UCLA, said in a news release.

The red giant is part of a binary star system called LL Pegasi. The pair of stars are surrounded by a hazy cloud of gas and dust, which is shaped by the duo’s highly elliptical orbit.

“Because of the orbital motion of the mass-losing red giant, the cold molecular gas constituting the wind from that star is being spun out like the sprays of water from a rotating garden sprinkler, forming the outflowing pattern of spiral shells,” Morris explained.

LL Pegasi can only be seen in infrared. Luckily, ALMA is designed specifically to image short wavelength radio emissions. Astronomers used ALMA observations to create 3-D images of the gas expelled by the dying red giant. The 3-D images revealed the unique, repeated spiral patterns of the ejected gas.

“This unusually ordered system opens the door to understanding how the orbits of such systems evolve with time as one of the stars loses most of its mass,” Morris said.

Morris and his colleagues detailed their analysis of LL Pegasi in the journal Nature Astronomy.

Scientists uncover cause of obsessive-compulsive disorder