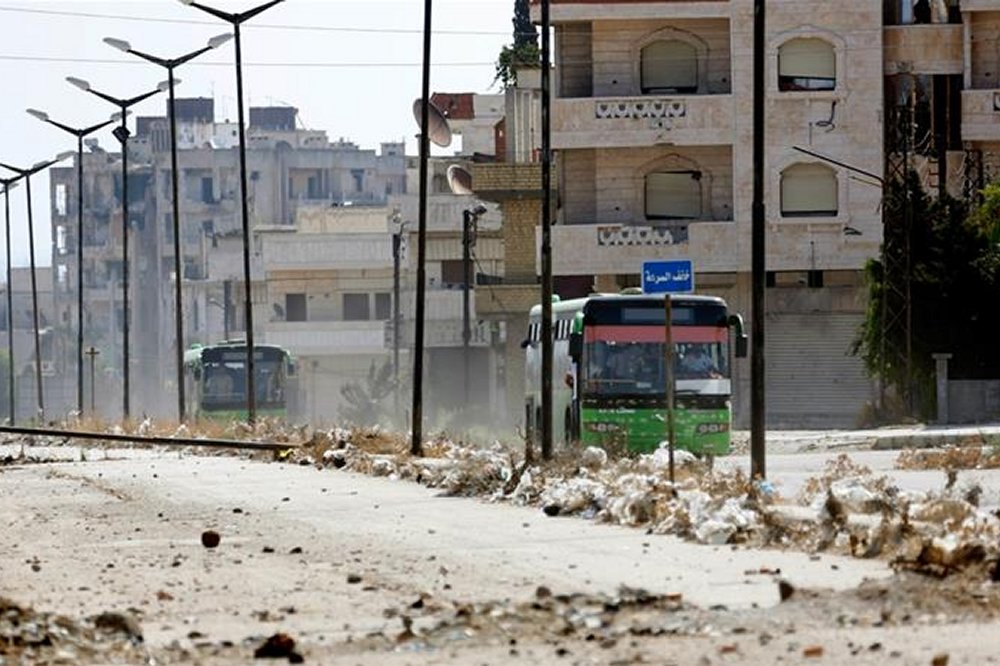 Rebel fighters and their families have begun leaving their last bastion in the Syrian city of Homs, state media and witnesses say, under an evacuation deal with the government expected to be among the largest of its kind.

The first few buses carrying rebels and their families drove out of Al Waer district on Saturday morning, heading for rebel-held areas northeast of Aleppo city.

Talal Barazi, the Homs governor, told Reuters news agency that about 1,500 people would depart for Aleppo’s countryside on Saturday, including at least 400 fighters.

Russian and Syrian forces were overseeing the evacuation, and the full departure of rebels from Al Waer would take about six weeks, he said.

“The preparations and the reality on the ground indicate that things will go well,” Barazi said.

The Syrian government describes such deals as a good way of bringing the country closer to peace after six years of conflict. But the opposition describes them as a tactic of forcibly displacing people who oppose Assad after years of bombardment and siege.

“There is a delibrate strategy from the Syrian government in terms of retaking some of these areas is that they lay a siege on the area preventing all kinds of supplies from getting in, including food, medical supplies etc and then they indiscriminately attack these areas,” the deputy director of emergencies at Human Rights Watch, Ole Solvang, told Al Jazeera.

“Aleppo was perhaps the most egregious example of that but we’ve seen it in many other places as well, so one of the major concerns HRW has is about these deals and the way they come about.”

Under the Al Waer deal, between 10,000 and 15,000 people would evacuate in batches over the coming weeks, according to a Britain-based war monitor and the opposition Homs Media Center.

The Syrian Observatory for Human Rights (SOHR) said the buses would go to the Jarablus area in the north, held by Turkey-backed rebels.

Once completed, it would mark the biggest evacuation during the war out of one Syrian district, which is home to about 40,000 civilians and more than 2,500 fighters, the SOHR said.

The deal follows other agreements that were never fully implemented between the government and rebel groups in Al Waer, which has been targeted heavily by air strikes in recent weeks.

Ole Solvang is the deputy director of emergencies at Human Rights Watch.