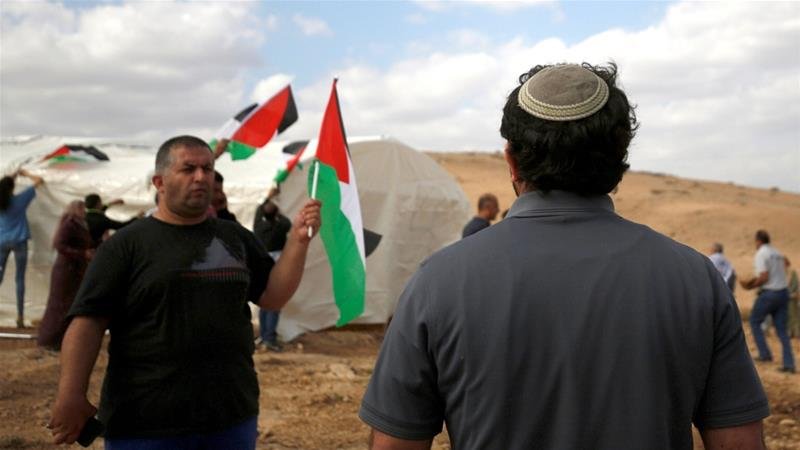 When Israeli opposition leader and Labour Party chairman Isaac Herzog published a plan for kick-starting the peace process last month, one of his stated goals was to “save the settlement blocs” – areas of the West Bank where Israel has built clusters of settlements, including larger towns.

Settlement blocs are often referred to by politicians and pundits alike, but there is no common understanding about precisely what the term means.

“From Israel’s point of view, I think the term is intentionally vague and amorphous,” Daniel Levy, president of the US/Middle East Project think-tank, told Al Jazeera. “Absent clear delineation, it is a meaningless formulation, and on the vast majority of occasions when it is loosely referred to, there is a deliberate absence of delineation.”

In negotiations over the past two decades, Israel has demanded that West Bank settlement blocs become part of Israeli territory in any final deal, typically as part of a land swap in which certain areas within Israel become part of a future Palestinian state. But on the rare occasions when talks have reached the details stage, there have been significant hurdles.

“The blocs encompass large swaths of land and, depending on the negotiators, can often be 10 or more percent of the West Bank,” Diana Buttu, a lawyer and former adviser to Palestine Liberation Organization (PLO) negotiators, told Al Jazeera.

Palestinian maps presented in various rounds of negotiations have allowed Israel to annex some two or three percent of the occupied West Bank. The best Israeli offer, territorially speaking, came via Ehud Olmert in 2008 – 6.5 percent, at close to a one-to-one swap – but that was when he was already a lame-duck prime minister.

Nor is it just about percentages: Olmert’s proposed territorial swaps, for example, raised important questions for Palestinian negotiators, who claimed that swapping out settlements such as Ariel, Maale Adumim and others would “prejudice contiguity, water aquifers and the viability of Palestine”.

“No Israeli government to date has accepted the Palestinian stipulation that land swaps be fully equal in size and ‘quality’,” veteran Israeli negotiator Michael Herzog acknowledged.

While many have despaired over the prospect of a two-state solution, the concept of land swaps has remained crucial for those who remain optimistic about its viability. Pro-Israeli groups have dismissed concerns about Israeli settlement expansion – and its effect on the possibility of Palestinian statehood – in light of potential future land swaps.

Eric Pickles, chairman of the UK parliamentary pressure group Conservative Friends of Israel, recently urged Theresa May’s government against “treating all settlements equally”, specifically on the basis that there will be “land swaps”. He suggested that some settlements should, therefore, be exempt from criticism.

For Palestinians, such dodging is one of the key problems with the land swaps concept. According to Buttu, “the land swaps have delayed and hindered negotiations and also fuelled the Israeli mindset that it is perfectly acceptable to steal land and build settlements because other land will be ‘swapped’ in the future”.

Meanwhile, Israeli settlements continue to have an impact on the ground.

“There are clear links between settlement policies and practices, illegal under international law, and humanitarian needs,” Robert Piper, the UN humanitarian coordinator for the occupied Palestinian territory, told Al Jazeera. “This is true both for large settlements as well as small, more remote ones.”

UN agencies, as well as Palestinian and Israeli groups, routinely document what Israel’s settlements – built in contravention of international law – mean for Palestinians.

Experts deny the suggestion by some politicians and pro-Israeli groups that land swaps are a kind of magic formula for achieving a viable two-state solution.

Valentina Azarova, an international lawyer and researcher based at Koc University in Istanbul, Turkey, told Al Jazeera that a peace agreement that permits settlement blocs to be part of land swaps could be “invalidated by operation of international law for its conflict with the peremptory norm prohibiting the acquisition of territory by force”.

“Even if an agreement preserved a two-state solution in territorial terms, that in itself would be no guarantee of civil and political rights, or the right of displaced persons to return home, and as such, would be only a partial contribution to the resolution of the ‘conflict’,” Azarova said.

For Buttu, only a full Israeli withdrawal from the occupied territories could save the two-state solution – but that is not on the agenda of any plausible Israeli government. Even a land swap of a small percent would leave more than 100,000 settlers in place, with no political appetite for their removal.

“There are creative solutions to various problems,” Levy said. “But creative solutions can’t paper over a gap that is so huge, because one side simply does not accept the legitimacy of the independent sovereign existence of the other.”