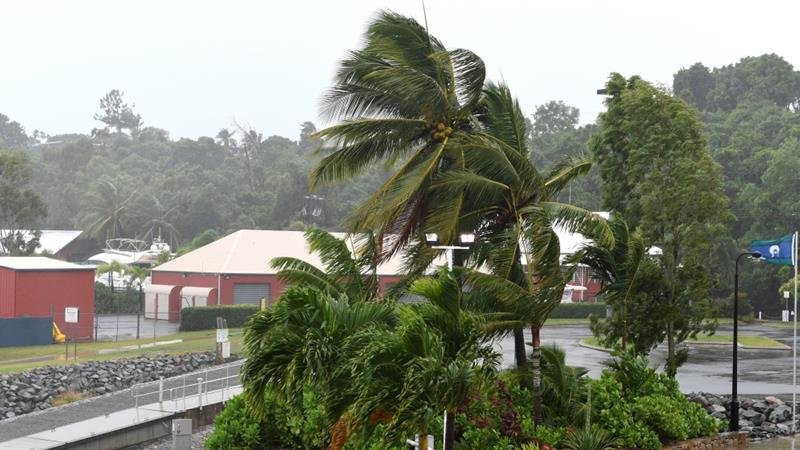 Cyclone Debbie has made landfall in northeast Australia, with lashing rain and howling winds battering the area and towns going into lockdown.

The category four storm – on a scale of five – began crossing the Queensland state coast on Tuesday, packing destructive wind gusts of up to 270 kilometre per hour near its wide core, the Bureau of Meteorology said.

Authorities urged some 30,000 people to evacuate before the storm hit island resorts along the Great Barrier Reef.

Before hitting the shore, the storm swept the Whitsunday Islands, where tourists waited out the storm in hotel rooms.

“We’re getting some reports already of roofs starting to lift, including at some of our own facilities in the Whitsundays,” Queensland Police Deputy Commissioner Steve Gollschewski told Australian Broadcasting Corporation television.

Authorities stockpiled food and fuel, and the army was on standby to deal with the aftermath.

However, as winds cut power to about 23,000 people, emergency response crews were also hunkered down until the storm blew over.

Authorities urged thousands of people in low-lying areas at risk from tidal surges and strong winds to flee their homes on Monday, in what would be the biggest evacuation seen in Australia since Cyclone Tracy devastated the northern city of Darwin in 1974.

However, police told Reuters they were not sure how many people had heeded that advice.

Ports at Abbot Point, Mackay and Hay Point were shut, Townsville airport was closed and airlines Qantas, Jetstar, Rex and Virgin Australia cancelled several flights to and from the region.

BHP Billiton and Glencore halted work at their coal mines in the storm’s path.