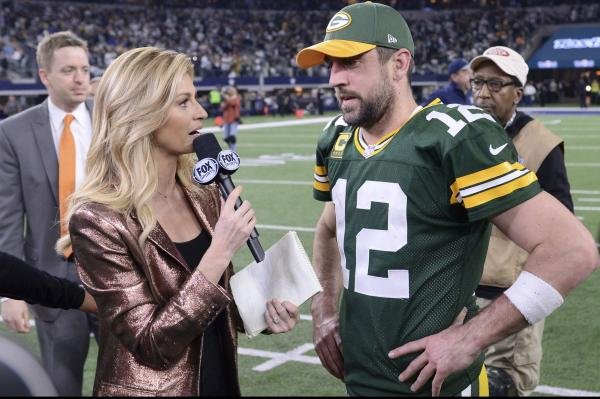 Mr. Discount Double Check did his best Tupac impression this weekend at the Final Four in Phoenix.

During a party where The Chainsmokers performed, many will remember Aaron Rodgers’ serenade best. According to multiple reports, the Green Bay Packers quarterback was called to the DJ booth with a “discount double-check” reference. When he went up there, the DJ played Tupac’s “Hit ‘Em Up,” as Rodgers jumped in vocally by mouthing the words to the song. He also threw up the W.

TMZ Sports has video of the explicit language performance.

Rodgers is West Coast all the way. The University of California product was born in Chico, Calif., where he also attended high school.

“It’s funny, I feel like Aaron Rodgers has cursed us all,” Brees told ESPN when comparing Rodgers to new prospects such as Clemson’s Deshaun Watson.

“He was getting ready for his pro day, so I was kind of watching some of the stuff he was doing to structure his pro day. I thought it was interesting, trying to show NFL coaches like, ‘I can make these types of throws. It’s like, the throw that seems to be in all these quarterbacks’ pro days is they script the old, ‘Scramble out here, and then the Green Bay-Dallas throw to Jared Cook to put ’em in field goal range at the end.’ The one that they were like is the most amazing throw ever — which it was, it was pretty impressive.”

“But I think all these guys are like, ‘Hey, look, I can do that.’ But not quite like Aaron.”

Rodgers, 33, has said that he wants to play for a long time, like Tom Brady. New England Patriots owner Robert Kraft recently said Brady told him he thinks he could play for seven more seasons.

“When you’ve reached the level of success that I have, and we have in Green Bay you continue to have to find ways to reinvent yourself, and adapt, and change and challenge yourself,” Rodgers told Pro Football Talk.

“And for me, the challenge has become, how do you stay at your best for an extended period of time, and how do you get your body in the best shape possible. You look at the Super Bowl, I’ve been a huge fan of Tom Brady for a long time, and consider him one of the greatest if not the greatest of all time. And he’s doing it at 39. And the way that he takes care of his body is really a model for all quarterbacks. Young quarterbacks and quarterbacks kind of in the middle, the second half of their career like myself, who would love to be 38, 39 or 40 and be playing at a high level and be healthy and have their body where they want it at that age. That’s kind of the standard and the model for what I want to be.”

Rodgers also attended the 2017 NCAA Men’s Division I Basketball Tournament early on to support the University of Wisconsin.

The Super Bowl champion and two-time MVP threw a league-high 40 touchdowns last season against just seven interceptions. He has never thrown more than 13 interceptions in a season during his 12-year career. In fact, Rodgers, has thrown eight or fewer interceptions in 10 of his 12 pro seasons for the Packers.