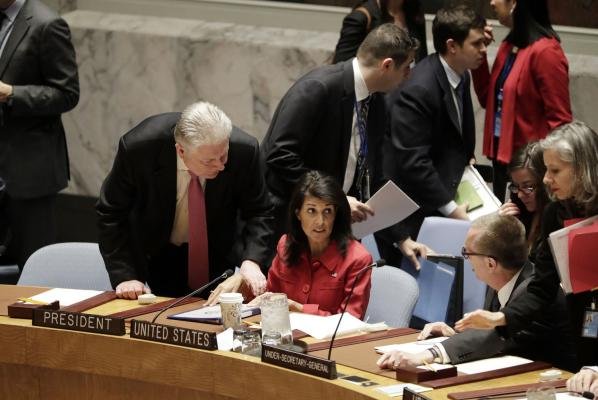 U.N. Ambassador Nikki Haley called on Russia to “act responsibly” and drop its support for Syrian President Bashar al-Assad a day after the United States launched a missile attack in response to Syria’s use of chemical bombs on civilians.

The stepped-up diplomatic push came after the first major U.S. military action against Assad since the start of the bloody six-year civil war, during which his government has been propped up by Russian and Iranian military and financial aid.

“The world is waiting for the Russian government to act responsibly in Syria,” Haley said during an emergency U.N. Security Council meeting Friday.

The meeting happened in open session after Haley rejected a request made on Russia’s behalf by Bolivia to hold the meeting behind closed doors.

“The United States, as president of the [Security Council] this month, decided the session would be held in the open,” Haley said in a statement. “Any country that chooses to defend the atrocities of the Syrian regime will have to do so in full view of the public, for all the world to hear.”

Syria’s military on Friday said U.S. missile strikes on the al-Shayrat airfield killed at least six people and made the United States a “partner” of terror organizations the likes of the Islamic State and al-Qaida.

Trump on Thursday night ordered the U.S. Navy to fire 59 Tomahawk cruise missiles into the airfield in west Syria from where it’s believed Assad’s regime launched a deadly chemical attack on Tuesday that killed and injured hundreds of men, women and children.

Russia on Friday condemned the U.S. bombing and said it was abandoning an agreement designed to minimize the risk of in-flight incidents, such as collisions, between Russian and U.S. aircraft flying in Syria. Russian President Vladimir Putin called the strikes a violation of international law.

Russia said the U.S. bombing was carried out to distract from a March airstrike by the U.S.-led international coalition in Mosul, Iraq, where about 150 civilians died.

“The Syrian army has no chemical weapons,” Russia’s presidential press service said in a statement. “Vladimir Putin regards the U.S. strikes on Syria as an attempt to draw public attention away from the numerous civilian casualties in Iraq.”

“The U.S. opted for a show of force, for military action against a country fighting international terrorism without taking the trouble to get the facts straight,” the Russian Foreign Ministry said in a statement. “It is not the first time that the U.S. chooses an irresponsible approach that aggravates problems the world is facing, and threatens international security. The very presence of military personnel from the U.S. and other countries in Syria without consent from the Syrian government or a U.N. Security Council mandate is an egregious and obvious violation of international law that cannot be justified.”

Syria’s military called the U.S. bombing an “aggression” that undermined the government’s efforts to combat terrorism, which made the U.S. government a “partner” of internationally recognized terrorist organizations, such as al-Qaida and the Islamic State. The Syrian regime said there would be consequences for “those who would take such a tragic and unfounded action.”

The United States launched the Tomahawk cruise missiles — with around 60,000 pounds of explosives — within 60 seconds, targeting the al-Shayrat airfield near the city of Homs. The sea-launched missiles, which fly close to the ground to avoid radar detection, targeted planes, fuel and other support infrastructure at the Syrian base.

Two U.S. Navy destroyers — the USS Ross and USS Porter — launched the missiles from the eastern Mediterranean Sea at about 8:40 p.m. EDT, or 4:40 a.m. Friday in Syria, the Pentagon said.

The missile strikes are the first known direct U.S. assault on the Syrian government since the country’s civil war began in 2011.

The Syrian Observatory for Human Rights war monitor said the Assad regime or Russia carried out its first airstrikes on Friday in Khan Sheikhoun in the Idlib province — where the alleged chemical attack occurred — after the U.S. bombing that “destroyed” the regime airfield.

Syria’s civil war has resulted in the deaths of more than a half-million people. It has been a major source of tension between Washington, D.C., Damascus and the Russian government, which remains a staunch ally of Assad’s and has provided his regime with military support.

Assad’s regime has previously been accused of carrying out chemical attacks — a claim denied by Assad and Russia.

Russia, Assad’s biggest ally, has provided military air support for Syria’s fight against Islamic State terrorists and rebels for more than a year. A U.S.-led coalition supporting the rebels has led the charge to oust Assad and has brokered multiple unsuccessful cease-fire agreements for that purpose. U.S. military troops, however, have been scarce inside Syria’s borders — as Pentagon strategists have instead chosen to maintain strictly a training and advisory role for the rebel alliance.

Russia said the United States used the allegations of the chemical attack as an excuse to bomb the Syrian regime.

“It is obvious that the cruise missile attack was prepared in advance. Any expert understands that Washington’s decision on air strikes predates the Idlib events, which simply served as a pretext for a show of force,” the Russian Foreign Ministry said. “There is no doubt that the military action by the U.S. is an attempt to divert attention from the situation in Mosul, where the campaign carried out among others by U.S.-led coalition has resulted in hundreds of civilian casualties and an escalating humanitarian disaster.”