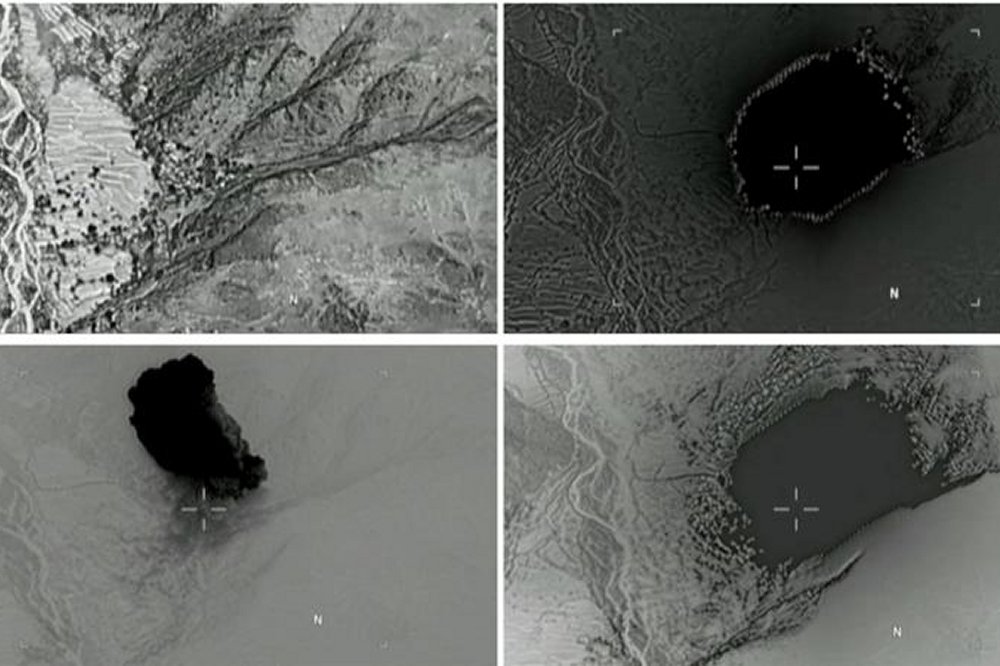 The number of ISIL fighters killed after the United States’ army dropped its largest non-nuclear bomb was at least 90, Afghan officials said on Saturday, raising a death toll of 36 reported a day earlier.

Dubbed the “Mother Of All Bombs”, the 9,797kg GBU-43 Massive Ordnance Air Blast (MOAB) was unleashed in combat for the first time on Thursday, engulfing a remote area of eastern Nangarhar province in a huge mushroom cloud and towering flames.

“ISIL fighters have suffered severe losses,” Ataullah Khogyani, spokesman for the provincial governor in Nangarhar, told Al Jazeera, adding that Afghan and US forces were conducting clean-up operations in the site of the massive blast.

“We pulled out 90 dead bodies of fighters who lived underground in those tunnels and caves for years, operating and planning attack across the country.”

The Pentagon said the target was a series of caves and bunkers used by ISIL, which stands for Islamic State of Iraq and the Levant and is also known as ISIS.

Khogyani said that there were no military and civilian casualties.

“Civilians had moved out of that area years ago, no family lived there except for these fighters,” he said.

“There are strictly no civilians casualties as this raid was well coordinated and measured only to hit ISIL areas that are otherwise not possible to eliminate in a ground operation.”

An elderly man who lives close to the bombing site in Achin’s Momand Dara area told the AFP news agency the blast was so piercingly loud that his infant granddaughter was experiencing hearing loss.

The massive bomb was dropped after fighting intensified over the past week and US-backed ground forces struggled to advance on the area.

A US special forces soldier was killed last Saturday in Nangarhar while conducting anti-ISIL operations.

“The enemy had created bunkers, tunnels and extensive mine fields, and this weapon was used to reduce those obstacles so that we could continue our offensive in Nangarhar,” General John Nicholson, the top US commander in Afghanistan, said on Friday.

President Ashraf Ghani threw his support behind the bombardment, saying it was “designed to support the efforts of the Afghan National Security Forces (ANSF) and US forces conducting clearance operations in the region”.

The bombing came only a week after US President Donald Trump ordered missile strikes against Syria in retaliation for a suspected chemical attack, and as China warned of the potential for conflict amid rising US tensions with North Korea.

However, the unprecedented attack triggered global shock waves, with some condemning the use of Afghanistan as what they called a testing ground for the weapon.

Some analysts called the action “disproportionate”.

“The Trump administration made a lot of noise with this bomb, but the general state of play on the ground remains the same: The Taliban continues to wage a formidable and ferocious insurgency. ISIS, by comparison, is a sideshow,” Michael Kugelman of the Woodrow Wilson Center in Washington told AFP.

“Still, from a strategic standpoint, there is an unsettling takeaway here: The US pulled off a huge shock and awe mission against an enemy that isn’t even the top threat to the US in Afghanistan. The Taliban continues to sit pretty.”

Hamid Karzai, former Afghan president, also condemned the US military’s deployment of MOAB, saying Afghanistan should not be used as a “testing ground” for weapons.

The Taliban armed group, which is expected to soon announce the start of this year’s fighting season, also denounced the bombing.

“Using this massive bomb cannot be justified and will leave a material and psychological impact on our people,” the armed group said in a statement.

ISIL has made inroads into Afghanistan in recent years, attracting disaffected members of the Pakistani and Afghan Taliban as well as Uzbek fighters

But the group has been steadily losing ground in the face of heavy pressure both from US air raids and a ground offensive led by Afghan forces.