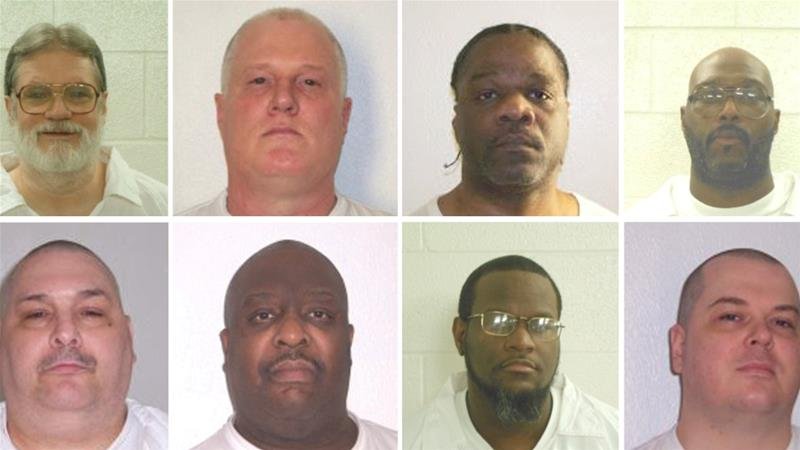 Arkansas’ already compromised plan to execute eight men by the end of the month has unravelled further, with a judge blocking the use of a lethal injection drug and the state’s highest court granting a stay to one of the inmates who had been scheduled to die.

Pulaski County Circuit Judge Wendell Griffen issued a temporary restraining order on Friday blocking the state from using its supply of vecuronium bromide, after a company said it had sold the drug to the state for medical purposes, not capital punishment.

Griffen’s order effectively halts the executions, which had dropped to six after Friday’s state Supreme Court order blocking one execution and a federal judge halting another last week, unless it is reversed or the state finds a new supply of the drug.

With another chemical in the lethal injection mix expiring at the end of the month, the Arkansas Department of Correction had issued an unprecedented execution schedule, with the first killing set for Monday.

Legal battles had prevented any executions in the state in the last 12 years.

The stay on Friday came in the case of Bruce Ward, 60, who was convicted of murdering a convenience store clerk in Little Rock and sentenced to death in 1990.

Lawyers for all of the convicts have asked a federal court in Little Rock to block the executions, arguing the state’s rush to the death chamber was unconstitutional and reckless. The court has yet to issue a ruling on the broader case.

The plan has drawn criticism from anti-death-penalty activists and rights groups.

The American Civil Liberties Union (ACLU) said in a petition that “Arkansas wants to use an execution drug combination – with midazolam – that’s never been used before in the state and that risks making prisoners feel as if they are burning alive from the inside while paralysed”.

Arkansas has not executed a prisoner since 2005. But the last lawsuit crumbled in February as the Supreme Court denied a petition filed by inmates, giving Governor Asa Hutchinson a chance to carry out executions before the sedative midazolam goes bad.

The state may not be able to replenish its supply anytime soon due to pressure on pharmaceutical companies from opponents of capital punishment.

Under Arkansas’ protocol, midazolam is used to sedate the inmate, vecuronium bromide then stops the inmate’s breathing and potassium chloride stops the heart.

McKesson, a medical supply company, has said it sold the prison system vecuronium bromide believing it would be used for medical purposes.

The company has said it had been reassured the drug would be returned and even issued a refund, but it never was.

Attorney General Leslie Rutledge’s office said she planned to file an emergency request with the state Supreme Court to vacate the temporary restraining order, saying Griffen should not handle the case.

Local media outlets had tweeted photos of Griffen at a demonstration held by execution opponents outside the Governor’s Mansion earlier on Friday.

“As a public opponent of capital punishment, Judge Griffen should have recused himself from this case,” Rutledge spokesman Judd Deere said.