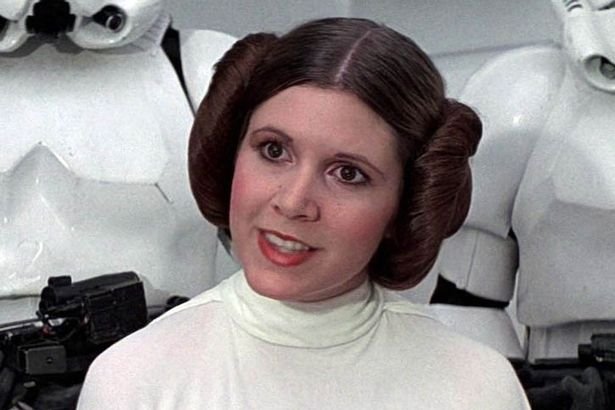 A film and Star Wars icon, Fisher famously portrayed Princess Leia in the franchise, starting with Star Wars: A New Hope in May 1977.

The actress died in December at the age of 60 after going into cardiac arrest on a flight from London to Los Angeles.

“I was just bowled over by her humor and her wit, how sardonic she was,” Hamill, who played Luke Skywalker, said Friday. “Within 20 minutes, she was telling me personal stories about her mother and father that I wouldn’t have shared with you if I’d known you 10 years.”

Fisher will appear as Leia in the upcoming sequels Star Wars: The Last Jedi and Star Wars: Episode IX, according to her brother, Todd Fisher. Her likeness was last used in last year’s Rogue One: A Star Wars Story.

On Thursday, Fisher’s daughter Billie Lourd paid tribute to her mother alongside Star Wars creator George Lucas as they wrapped up a 40th anniversary panel celebrating the release of A New Hope.

Lourd wore a white dress that resembled the one Fisher famously donned in the original film.

“My mom used to say she never knew where Princess Leia ended and Carrie Fisher began,” Lourd said onstage. “She was imperfect in many ways but her imperfections and willingness to speak about them are what made her more than perfect. My mom, like Leia, wasn’t ever afraid to speak her mind and say things that might have made most people uncomfortable.”

Hamill said his relationship with Fisher was sibling-like, just like their characters are in the films.

“It would be very easy to be consumed with grief. Let me tell you, when I go to sleep at night, there’s never a day so far where I don’t think of her,” Hamill said. “And when I think of her … she’s looking down from the celestial stratosphere with those big brown eyes, that sly smile on her face as she lovingly extends me the middle finger.”

What Lady Gaga Eats on Tour

Drake and The Chainsmokers each nominated for 22 Billboard Music Awards