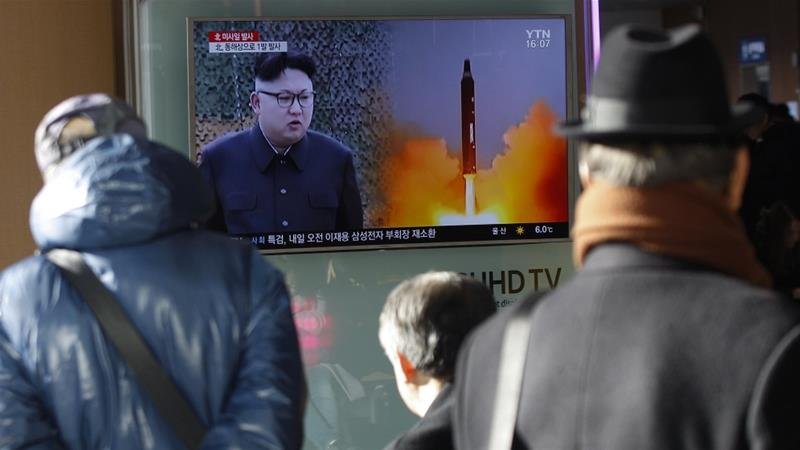 North Korea will not stand by and watch the United States launch a preemptive strike, a Pyongyang foreign ministry official said Friday.

In an interview with Chinese state tabloid Global Times, North Korea’s director of the foreign ministry’s Asia department said there are no “empty words” when Pyongyang vows to strike back.

“The Korean peninsula at present is a tinderbox at risk of war because of the U.S. policy of pressure against North Korea,” said Jong Son U. “We will inevitably safeguard our future with our own strength.”

Jong also claimed the United States was threatening North Korea with nuclear weapons like a “schizophrenic patient” and that Pyongyang would wage a “full-scale war” if the “U.S. nuclear-powered aircraft carrier fires a single bullet toward our territory.”

Amid the tough talk from U.S. President Donald Trump and North Korean officials, however, China has been calling for calm.

On Friday, Beijing’s Foreign Minister Wang Yi said no one can win on the Korean peninsula through the use of force.

“We urge all parties to refrain from inflammatory or threatening statements and deeds to prevent the situation on the Korean peninsula from becoming irreversible,” Wang told reporters after meeting with French Foreign Minister Jean-Marc Ayrault.

A Seoul foreign ministry official said there would be “strong punitive measures” if such actions are taken and condemned North Korea belligerence.

Analysts speculate Pyongyang could engage in a provocation soon, possibly in time for the celebration of founder Kim Il Sung’s birth anniversary on Saturday.

There is also speculation about what options the United States would pursue following Pyongyang’s next test.

NBC News reported late Thursday the United States may launch a preemptive strike against North Korea in response to a nuclear weapons test, but others are challenging the report.

U.S. drops ‘mother of all bombs’ on rural Afghan IS compound