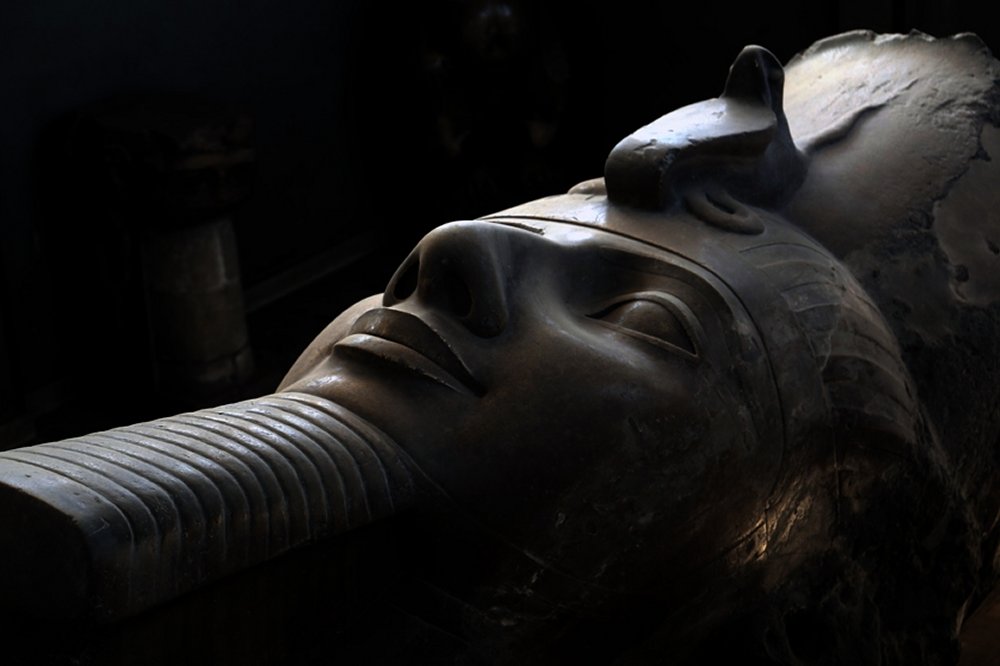 Dozens of wrinkled Egyptian men sip tea, draw smoke from water pipes and boisterously chat in Arabic. They lounge at a bustling alleyway cafe, sandwiched between the labyrinths of crumbling apartment buildings in the heart of Cairo, adjacent to Tahrir Square.

Just footsteps away, the maniacal spectacle of Cairo traffic is at work. Rusty cars whir by, lurching left and right, an orchestra of horns trumpeting their arrival and departure from one traffic light to the next. There’s no time for signalling. Exhaust fumes hang thick in the air. Around each corner, there is singing, squawking, screaming.

This is both the doorstep to the Middle East, the corridor to North Africa, the launchpad of revolutions that reverberated worldwide, and the home of more than nine million Egyptians. But despite the beautiful chaos, Egypt is actually drought-stricken when it comes to visitors.

That reality is more visible, just a few blocks away, towards the banks of the River Nile. The marble-encrusted lobbies of Cairo’s many luxury hotels overlooking the Nile, once bustling with globetrotting tourists from every corner of the earth, are now silent.

Still recovering from the hangover of a failed revolution, a string of unfortunate airline disasters – including an ISIL bombing of Russian Metrojet Flight 9268 over the Sinai Peninsula in 2015, which killed 224 people, and indefinitely halted all Russian flights to the country – and most recently, the deadly bombings of Coptic churches in Tanta and Alexandria earlier this month, Egypt’s once-resilient tourism industry is battered and bruised.

The city’s tour guides, who used to be overworked, have been hit the hardest by the tourism industry’s fall from grace.

“I used to work at least 20 days a month,” said Abdel Baset, a 45-year-old slender and soft-spoken Egyptian guide.

“Sometimes you have to close your phone because of many people calling you. During Christmas time and Easter holidays, no room, no hotels, no cars, no guide. Everything was busy.”

Baset, 45, has weathered the downturn in tourists by selling property and running his father’s cafe in Giza to support his wife and three children. His eyes are kind, inquisitive – and telling of his passion for archaeology and his country’s colourful history.

“It’s the opposite now, completely,” Baset added, with hints of sadness in his voice as he explained the deterioration of his work.

“One month, maybe you don’t work at all. We don’t expect as many tourists as before. It’s very hard. I was lucky to not quit tourism. Many of my friends, the tour guides, they quit tourism and they found other work.”

The number of tourists visiting Egypt has plummeted from 14.7 million to 5.4 million in 2016, according to the United Nations World Tourism Organisation, or UNWTO, costing the country billions.

Cook noted that Egypt’s tourism industry has often borne the brunt of the country’s political uncertainty and its security crises.

“I think the uprising in 2011 and the uncertainty throughout the transition period from [Hosni] Mubarak to [Mohamed] Morsi contributed [to] people staying away,” he added. “It’s really not terribly surprising given everything that’s happened since January 25, 2011, that the Egyptian tourism has been hit extremely hard. In 2010, the country welcomed something like 15 million foreign tourists. They haven’t even come close to that since. It’s unfortunate.”

However, before the most recent Coptic church attacks in Alexandria and Tanta, there were indicators tourism could be on the upswing in 2017.

Last month, a colossal pharaoh’s head – thought to belong to either Ramses II or King Psammetichus I – and a limestone bust of Seti II, were unearthed from from the mud of a Cairo slum. On the heels of that find, a new pyramid dating back to the 13th dynasty, was discovered just south of Cairo by an Egyptian excavation team. These discoveries, both widely publicised, revived international interest in Egypt as an archaeological hotspot.

Russian flights to Egypt, which have been suspended since the Metrojet bombing in 2015, could also resume soon, although the prospect remains dubious. Nearly two and a half million Russians visited Egypt in 2014, making up roughly  a third of the country’s visitors, and a revival of this flow in human traffic would also boost the sagging tourism sector.

Egyptians were also hopeful that Germany’s Chancellor Angela Merkel, actor Will Smith, and football superstar Lionel Messi’s recent visits to the pyramids would provide further momentum to a potential influx in foreign travelers.

“People are fascinated by ancient Egypt and so it would bring more people back,” Cook said in reference to the latest archaeological discoveries.

“The fact that high-profile individuals like Lionel Messi and Will Smith were visiting the country, they were very hopeful that those were good signs and that they would attract people back to the country,” he added.

But all this momentum, Cook said, is likely to now be interrupted following this month’s Coptic church bombings.

“Every time [Egyptians] think they’re turning the corner, something else happens that undermines the tourism industry,” Cook explained. “Whether it’s the MetroJet [bombing] or the EgyptAir flight [crash], or the expectation that things would change in the coming months, now they’re dealing with new terrorist attacks, which are likely to scare people away.”

However, Sandra Carvao, a spokeswoman for UNWTO, disagreed.

She cited UNWTO data from January and February, which saw a 52 percent increase in international visitors compared with the same time last year. Carvao said that despite the recent attacks, she expects tourism to continue to climb in Egypt through 2017.

“Egypt is a tourism leader both in the region and globally,” Carvao said via telephone from Madrid, Spain.

“It has gone through difficult circumstances before but it has always come back stronger … I think this time will not be different,” she added.

The bellwether of the Egyptian tourism industry is perhaps the Great Pyramids of Giza.

Hundreds, sometimes thousands, of tourists used to scurry about the idyllic and dusty dunes surrounding the mighty sunbaked temples. Although tourism is apparently on the rise, exploring the site of the pyramids is like walking on the moon: it’s deserted, forlorn and uninhabited. The Great Sphinx, stoic-faced and imposing, and the three looming pyramids surrounding it, are often empty and quiet.

This evident slump in traffic is worrying for the UN Educational, Scientific and Cultural Organisation UNESCO, which is reponsible for preserving the pyramids.

“It concerns us because we understand that dynamic of tourism,” said Peter DeBrine, a senior project officer of UNESCO’s World Heritage Centre and a coordinator of its Sustainable Tourism Programme.

“We look at tourism as a way to support conservation, so if tourism drops, then that could then have a negative impact on the conservation of the sites. If they don’t have the resources to protect the site, that’s a huge concern.”

The Grand Egyptian Museum, a billion-dollar project dedicated to Egypt’s antiquities that is expected to partially open in 2018 in close proximity to the Giza pyramids, has been championed as a saviour of tourism. The 60,000-square-foot structure has been dubbed “Giza’s fourth pyramid” by Egyptian officials, is roughly five times bigger than the Egyptian Museum in Tahrir Square, and is described as the largest archaeological museum in the world.

But whether this grandiose museum will translate into an increase of foreign visitors to Egypt and its pyramids, remains to be seen.

For the handful of current visitors to the ancient site, though, the absence of heavy tourist traffic allows for an intimate and peaceful encounter with the pyramids that a decade ago, would have been impossible.

“It was nice not to be surrounded by 400 pushy tourists with Nikon cameras,” said Nicole Haire, 49, a middle-school Canadian vice principal based in Doha, Qatar, who visited Egypt with her daughter Hannah in January.

“We went to Egypt to experience the culture but also the history of it, and we experienced that in isolation,” she added. “I felt like we went back in time. When we walked through different sites, quite often it was just us and the guide. I truly felt like a part of the fabric of the historic sites we were in.”

Jack Monell, 44, a criminology professor from Winston-Salem, North Carolina, had an equally sublime experience when he visited the pyramids in March.

“My visit to the pyramids, primarily, it wasn’t as busy as I’ve heard,” Monell described.

“I wasn’t overwhelmed. You could kind of have that surreal experience with these gigantic entities which have been existent for thousands of years. I’m a native New Yorker. I’m used to crowds and I’m used to kind of the hustle-bustle of major cities, so it wasn’t overwhelming. It wasn’t uncomfortable. I felt like I could move around and navigate. It was enjoyable,” he added.

Monell, though, said that the Coptic church bombings in Alexandria or Tanta wouldn’t have altered his decision to visit had the attacks occurred prior to his trip.

“I would be concerned and apprehensive, but [it] wouldn’t deter me,” he explained. “I’ve travelled all over the world, and sadly, terrorism is not exclusive to Islamic countries.”

Haire, too, said the attacks were worrying but wouldn’t have stopped her from seeing Egypt.

“I don’t think we can live life in fear of the eventuality of things happening to us,” she said.

Baset, the Giza-based guide, lamented the attacks, but was steadfast in his optimism that he would see a reversal of his fortunes this year, noting that prior to the Coptic church bombings, he had been busier than usual.

“[These] things happen everywhere,” he said. “Terrorism is everywhere. In Istanbul you find some attacks. [Last month] it was London. The media sometimes is exaggerating about things in Egypt. Egypt is very safe.”

But he added cautiously, “Nothing is sure in this world.”

Emirates to cut flights to U.S. amid Trump’s travel restrictions