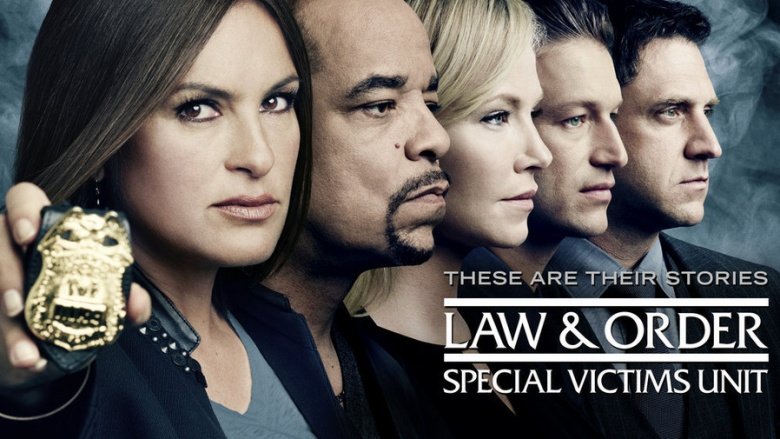 For over 15 years, Law & Order: Special Victims Unit has captivated television audiences with dramatic tales of murder and sexual assault that are “ripped from the headlines.” While many of the episodes are only loosely based on actual real-life crimes, SVU’s production history and cast offer up some interesting—and 100 percent true—drama of their own. These are their stories.

The series almost had a much darker title

Dick Wolf, creator of the original Law & Order drama, initially planned for his new series to be titled Law & Order: Sex Crimes. Barry Diller, head of the studio that would produce the show at the time, didn’t want “sex” in the title. After conversations between Wolf and the other producers, they made the decision to name the show Law & Order: Special Victims Unit. The new title still tied it to Wolf’s wildly successful Law & Order franchise, while being more palatable to nervous network execs and the viewing public. The title also honored the officers of NYPD’s real-life Special Victims Division, who handle investigating sexually based offenses in all of New York City’s five boroughs.

Rapper and actor Ice-T portrays Detective Odafin “Fin” Tutuola in the SVU squad room. Over the 16 seasons he’s been featured on the series, he’s become a fan favorite for his portrayal of the street-smart, no-nonsense detective, but Tutuola’s occasionally strained relationship with partner Detective John Munch (portrayed by Richard Belzer) almost never happened. The rapper only agreed to four episodes at first because he was concerned about the “brutal” shooting schedule, saying in his memoir, “I’d rather have less money and more freedom.” But Ice-T signed on for the long haul after he was reassured that as part of an ensemble cast, the hours wouldn’t be grueling and the residuals he’d earn as a series regular on a potentially long-running show would earn him a steady post-show income, like — to quote Ice — a “little money machine.”

Belzer became an original cast member of SVU when he asked the show’s producers if he could reprise his role as Detective John Munch. Munch was previously a character on the original Law & Order series as well as the TV crime drama Homicide: Life on the Street. Dick Wolf reportedly loved the idea, and added Munch to the lineup. The addition of Belzer as Munch made Special Victims Unit the only primetime television drama to be spun off from two separate shows. Belzer would go on to become the King of Crossovers, appearing as Munch in a record ten different television programs across five different networks. His guest appearance in the 17th-season SVU episode “Fashionable Crimes” marks the 23rd season that the character has appeared on TV.

Shortly after being cast in the series as Olivia Benson in 1999, actress Mariska Hargitay actually became a trained rape victim advocate after her fan mail switched from mainly autograph requests to victims sharing their stories with the woman behind the fictional detective. Her dedication to victims of sexual assault didn’t stop there–Hargitay established the nonprofit Joyful Heart Foundation in 2004. The charity provides support to survivors of sexual assault, domestic violence, and child abuse. The foundation even brought experts in the field together with the writers and producers of SVU to help craft storylines for the show.

The highest-paid cops in the country

By season 12 of SVU, series stars Christopher Meloni and Mariska Hargitay had entered the ranks of television’s highest-paid actors on a drama. Each were earning nearly $400,000 an episode, an amount that TV Guide claimed at the time was only exceeded by Hugh Laurie of House, M.D. At the end of season 12, Meloni departed the cast after being unable to negotiate acceptable terms of his contract with the network. After his departure, Hargitay was reported to be earning $450,000 an episode in season 16, and $500,000 an episode for season 17.

How a lawmaker became a major part of the show

You’re probably familiar with the iconic opening monologue of every Law & Order show, which begins with the phrase, “In the criminal justice system.” Steven Zirnkilton provided these narrations after he was hired by series creator Dick Wolf for a small acting part on the original Law & Order series. If Zirnkilton’s name sounds familiar to residents of the Northeast, that’s because he actually served four terms as a lawmaker in the Maine State House of Representatives.

Why SVU is still around 17 seasons later

At the time of this writing, Law & Order: Special Victims Unit is the longest-running scripted non-animated U.S. primetime TV series since the cancellation of the original Law & Order in 2010. SVU started its 17th season on September 23, 2015, and was renewed for an 18th season in early 2016. Why is the show so wildly popular with its devoted fans? Some actors say it’s the subject matter and the great storytelling. Survivors of sexual assault and law enforcement officers regularly approach the actors to thank them for their portrayal of such an important subject. Whatever the reason for its stunning success, we hope that we’ll continue to see Detectives Benson, Tutuola, and the rest of the cast continue to put away bad guys for years to come.

Since last year, the producers of Law and Order: Special Victims Unit have been sitting on an episode based on real-life businessman-turned-politician Donald Trump. The episode was delayed twice before Trump’s election to the office of President of the United States and then pulled indefinitely after he was elected. Given the president’s ongoing war with the media and other television shows like Saturday Night Live, pulling the episode might not be such a bad idea. If it ever does hit the airwaves, one thing is for sure—you’ll want to bring plenty of popcorn for both the episode and the aftermath.

Taylor Swift’s obsession with the show

Over the years, Law and Order: SVU character Olivia Benson has attracted legions of fans. Among them is singer and performer Taylor Swift, who’s reportedly obsessed with both the show and the gritty female detective portrayed by Mariska Hargitay. Swift is such a big fan of the show that she even named one of her cats after Olivia, and the pampered kitty (and her adopted feline sibling Meredith) have their own gigantic following on social media, where Swift posts pictures of the cats to her millions of Instagram followers.

Christopher Meloni got started in commercials

As the steely-eyed and sometimes temperamental Detective Stabler on SVU, Christopher Meloni and his dynamic partnership with Mariska Hargitay’s character Olivia were one of the best parts of the show. We can thank the acting gods for letting Meloni get picked up for big-time acting roles, first on the HBO drama Oz, and then on SVU. Before his big break, Meloni made a living as a construction worker and bouncer while also appearing in commercials, like this one for McDonald’s. We can’t really imagine any lady actually going for “Larry’s” pickup strategy, but maybe Meloni’s rugged good looks make up for his commercial character being a total cheapskate.

Related Topics:EntertainmentLaw & Order SVU
Up Next