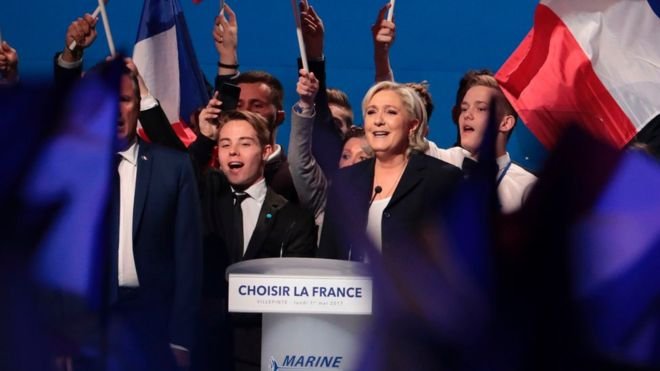 She linked Mr Macron to the unpopular current President, François Hollande, in whose cabinet he once served.

Ms Le Pen trails Mr Macron in the polls by about 20 percentage points ahead of Sunday’s second round of voting.

Mr Macron, who will hold a rally later, earlier told the BBC the EU must reform or face the prospect of “Frexit”.

Meanwhile, clashes have broken out between police and protesters on the sidelines of a traditional May Day labour march in Paris.

The violence happened near Place de la Bastille as the march, led by three trade unions, headed towards another square.

Although five major unions have urged their members not to vote for National Front (FN) leader Ms Le Pen, only two have expressed their support for Mr Macron.

Earlier, Ms Le Pen’s estranged 88-year-old father and the founder of the FN was at a rally by the statue of Joan of Arc, a long-time symbol of patriotism for the FN.

This is where Jean-Marie Le Pen traditionally held his May Day rallies but this year’s event was attended by only a couple of hundred of the party’s old guard, the BBC’s Paris correspondent Hugh Schofield reports.

Marine Le Pen has sought to modernise the FN in recent years and at her rally in Paris, she called herself the candidate of change, belief and action.

She launched a full-throttled attack on Mr Macron, calling him the candidate of “a morbid continuity, littered with the corpses of jobs transferred offshore, the ruins of bust businesses, and the gaping holes of deficit and debt”.

“Emmanuel Macron is just Francois Hollande who wants to stay and who is hanging on to power like a barnacle,” she told a rally in Villepinte, a suburb north of the capital.

Ms Le Pen, 48, has capitalised on anti-EU feeling, and has promised a referendum on France’s membership.

She has won support in rural and former industrial areas by promising to retake control of France’s borders from the EU and slash immigration.

Mr Macron, the 39-year-old leader of the recently created En Marche! movement, earlier told the BBC that though he believed the European Union was still “extremely important for French people”, it needed to change.

“We have to face the situation, to listen to our people, and to listen to the fact that they are extremely angry today, impatient and the dysfunction of the EU is no more sustainable.

“So I do consider that my mandate, the day after, will be at the same time to reform in depth the European Union and our European project.”

Mr Macron added that if he were to allow the EU to continue to function as it was it would be a “betrayal”.

“And I don’t want to do so,” he said. “Because the day after, we will have a Frexit or we will have [Ms Le Pen’s] National Front (FN) again.”

Brexit: UK and EU at odds over size of ‘divorce bill’