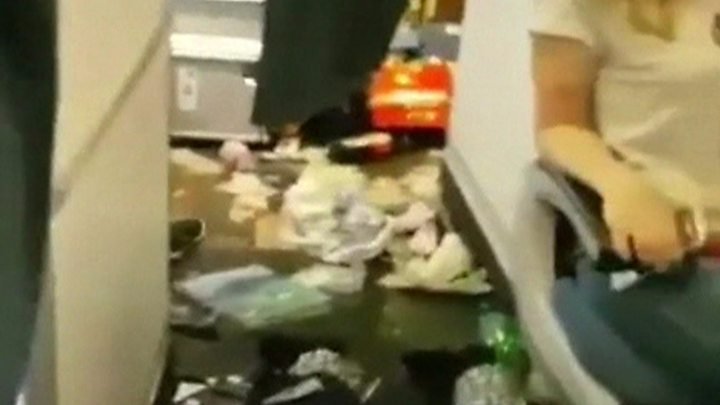 At least 27 people have been hurt as an Aeroflot flight from Moscow to Bangkok hit a patch of severe turbulence.

A passenger described being “hurled” up to the ceiling, trying to cling on amid shaking which “wouldn’t stop”.

The turbulence occurred in clear skies, which meant the crew were not able to warn passengers, the airline said.

“The reasons behind the injures were that some of the passengers had not had their seatbelts fastened,” Aeroflot said in a statement.

Mobile phone footage of the aftermath of the incident showed injured people lying in the aisles, with packets of food and other items scattered on the floor.

“We were hurled up into the roof of the plane, it was practically impossible to hold on,” a passenger who gave her first name as Yevgenia told Rossiya 24 by phone

“It felt like the shaking wouldn’t stop, that we would just crash,” she added.

The incident took place about 40 minutes before the Boeing 777 was due to land in Bangkok.

Twenty-four of those injured were Russians while the other three were Thai, the Russian embassy in Thailand said.

Fifteen people, including one child, were admitted to hospitals in Bangkok, a health ministry spokesman told the Russian news agency Interfax.

Three people needed surgery, two for multiple leg fractures and one for broken ribs, he said.

The airline said 313 people had been travelling on the flight, SU 270.