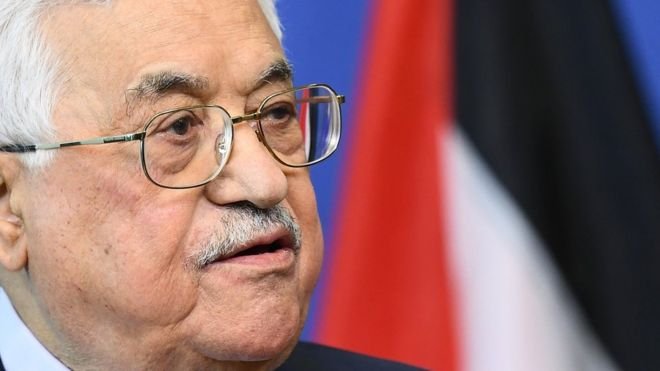 US President Donald Trump is to hold talks with the Palestinian leader, Mahmoud Abbas, at the White House.

The meeting is part of an attempt to revive the Middle East peace process.

Mr Abbas will seek support for an Arab plan offering Israel normalisation of ties if it agrees to a Palestinian state based on pre-1967 boundaries.

But he will also reportedly face pressure to halt payments to families of Palestinian prisoners and those killed in the conflict with Israel.

Israel’s government says the payments encourage terrorism, but Palestinian officials say stopping them would be politically untenable for Mr Abbas, who is deeply unpopular back home.

A White House spokesman said Mr Trump’s “ultimate goal” was to achieve peace in the Middle East, and that Wednesday’s meeting with the president of the Palestinian Authority (PA) would focus on that.

But they have been reassured by one of Mr Trump’s envoys that he is serious about a deal, apparently as part of a plan backed by the Arab League at a summit in March. The 2002 Arab Peace Initiative calls for Israel to withdraw from “all the Arab territories” occupied since the 1967 Middle East war and accept an independent Palestinian state in exchange for “normal relations” with Arab nations.

Our correspondent says this is a chance for Mr Abbas to make the Palestinian case. He will stress that any solution must be based on two states, she adds. Mr Trump has been ambivalent about that, saying in February that he was “looking at two-state and one-state, and I like the one that both parties like”.

What is the two-state solution?

A “two-state solution” to the decades-old conflict between Israelis and Palestinians is the declared goal of their leaders and the international community.

It is shorthand for a final settlement that would see the creation of an independent state of Palestine within pre-1967 ceasefire lines in the West Bank, Gaza Strip and East Jerusalem, living peacefully alongside Israel.

The UN, the Arab League, the European Union, Russia and, until now, the US routinely restate their commitment to the concept.

In a speech at an Israeli independence day event at the White House on Tuesday, US Vice-President Mike Pence declared that “valuable progress” was being made towards restarting substantive peace talks for the first time since 2014.

“Momentum is building and goodwill is growing,” he added.

Three influential Republican senators meanwhile called on Mr Trump to tell Mr Abbas stop using aid money to pay the families of Palestinian “martyrs” and those imprisoned in Israel for offences ranging from stone-throwing to murder.

The PA spends about $300m (£232m) each year – about 8% of its budget – on salaries and benefits under the programme, according to the senators.

The chairman of the Palestinian Prisoners’ Affairs Committee has defended the payments, saying they represent a “national, humanitarian and social duty that shall always be fulfilled regardless of Israeli and international pressures”.

An adviser to Mr Abbas also told the Associated Press that the president could not afford to concede, especially with one of his main rivals leading a widely-supported hunger strike by hundreds of Palestinian prisoners in protest at conditions in Israeli jails and the detention of people without trial.

Iran coal mine explosion: More than 50 trapped in Golestan