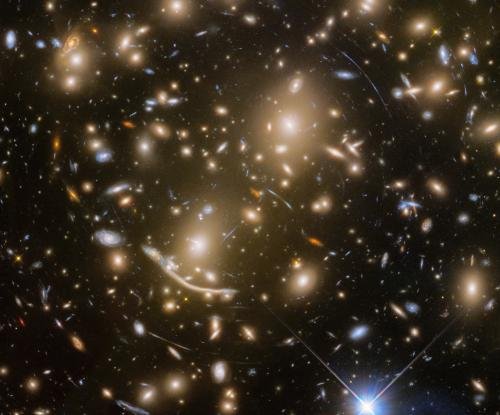 To the naked eye, space can sometimes seem like a lonely place. But as rendered by the Hubble Space Telescope, the cosmos appears crowded.

A new image captured by Hubble showcases Abell 370, a massive galaxy cluster featuring several hundred galaxies. The assortment of galaxies is organized by the pull of gravity.

The cluster is situated 4 billion light-years from Earth in the constellation Cetus. It has long been used by astronomers to find and study more distant galaxies.

The largest and brightest galaxies in Abell 370 appear yellow-white. They are elliptical galaxies, and each one hosts several billion stars.

Astronomers estimate the Dragon’s contours are formed by a solitary, faraway spiral galaxy, stretched into a long dragon-shaped arc.

Abell 370 was imaged — in the visible and near-infrared spectrum — as part of the Frontier Fields project. Project organizers combined the powers of NASA’s largest observatories with other large telescopes to study galactic clusters and galaxy formation.