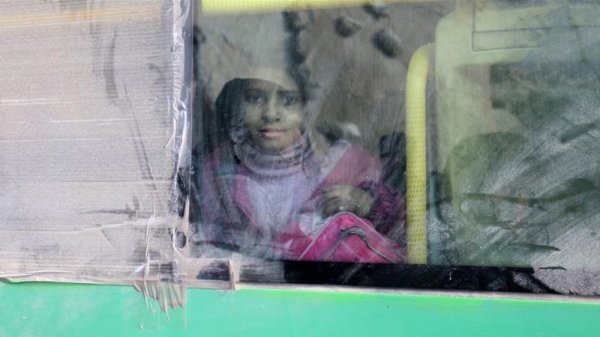 Hundreds of Syrian fighters have begun to leave the besieged Damascus suburb of Barzeh as part of an evacuation deal reached with the government, according to state television and a war monitor.

State-run Ekhbariya television cited its reporter there as saying the evacuation of fighters from Barzeh for the rebel-held Idlib province had begun to be implemented on Monday, but without giving further details.

“Armed men and some of their families have begun leaving Barzeh on 40 buses heading towards northern Syria,” the channel said in a news alert.

The Syrian Observatory for Human Rights (SOHR), the Britain-based war monitor, reported that buses had arrived in Barzeh at dawn and a group of hundreds of fighters and their family members had started to board.

The Barzeh evacuation deal was struck late on Sunday night, and dozens of people had gathered in the district from the morning.

The SOHR said more people would leave Barzeh over the coming days as part of the same deal.

A source from the pro-government National Defence Forces said rebel fighters would be allowed to take their “personal weapons” with them.

They are the first evacuations from Damascus in the country’s six-year war.

Al Jazeera’s Charles Stratford, reporting from Gaziantep in neighbouring Turkey, said armed opposition groups have been highly critical of these evacuation plans and accuse the government of using them as a form of “ethnic cleansing”.

“It’s a start today, but there are huge questions … about how the opposition forces will respond to the de-escalation plan,” he said.

Barzeh, near the rebel-held Eastern Ghouta district of towns and farms, has been the site of intense fighting between rebels and the Syrian army in recent months.

A military media unit run by the armed Lebanese Shia armed group Hezbollah, an ally of the Syrian government, reported on Monday that several Red Crescent ambulances had also arrived at the rebel-besieged towns of Fouaa and Kefraya near Idlib.

Those two towns were part of a mutual evacuation deal that also included two towns besieged by government forces and involved exchanging thousands of people between the warring sides last month.

Syrian President Bashar al-Assad has promoted the use of such evacuations, along with what his government calls “reconciliation” deals for rebel-held areas that surrender to the government, as a way of reducing bloodshed.

However, the UN has criticised both the use of siege tactics which precede such deals and the evacuations themselves as amounting to forcible displacement.

Many of those who have left other besieged areas of Syria have also relocated to Idlib, a mostly rural province abutting the Turkish border which is a major rebel stronghold.

Negotiations were ongoing for a similar deal in the district of Qabun, in Damascus’s northeast, which has seen fierce shelling for weeks by forces loyal to the Syrian government.

The deal follows Saturday’s start of a “de-escalation process” put in place by government allies Russia and Iran and rebel-backer Turkey in four regions of Syria – but not the capital itself.

The Syrian civil war has left hundreds of thousands dead since unrest first started in March 2011, and millions of Syrians have been displaced inside and outside of the country.