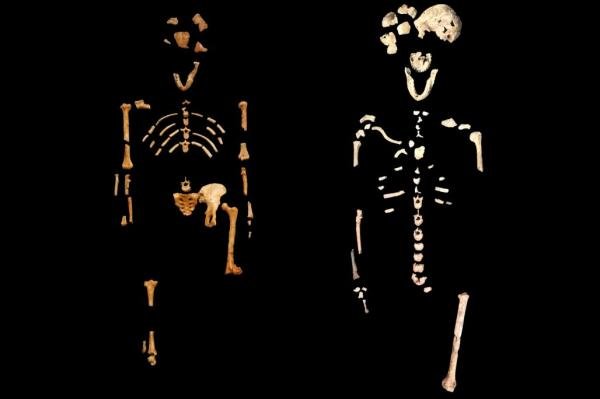 The early hominin species was first identified in a 2015 paper. The remains among a plethora of hominin remains recovered from the cave’s Dinaledi Chamber.

Another remote chamber, dubbed the Lesedi Chamber, yielded the latest fossil evidence of Homo naledi, including the bones of at least three juvenile and adult specimens, as well as a complete skull.

The early hominin species lived among both early humans and other hominins between 226,000 and 335,000 years ago. The latest discovery offers further proof that the species actively buried their dead.

“What are the odds of a second, almost identical occurrence happening by chance?” John Hawks, a paleoanthropologist at the University of Wisconsin, said in a news release.

The latest haul, which comprised more than 130 fossils, also features the most complete Homo naledi skeleton yet.

“We finally get a look at the face of Homo naledi,” said Peter Schmid, a researcher with both the universities of Witwatersrand and Zurich.

The skeleton of ‘Neo’ is one of the most complete ever discovered, technically more complete than the famous Lucy fossil given the preservation of the skull and mandible,” said lead excavator Lee Berger, a paleoanthropologist from the University of Witwatersrand.

With the latest find, Homo naledi boasts the third most complete fossil record after modern humans and Neanderthals.

Though the hominin was rather small and featured a relatively small, primitive brain, its curved fingers and burial habits suggest the species used tools and developed the earliest hints of what might be called “culture.” The species is characterized by an unusual combination of primitive and modern features.

“What is so provacative about Homo naledi is that these are creatures with brains one third the size of ours,” Hawks said. “This is clearly not a human, yet it seems to share a very deep aspect of behavior that we recognize, an enduring care for other individuals that continues after their deaths. It awes me that we may be seeing the deepest roots of human cultural practices.”

Researchers described the latest trove of fossils in the journal eLife.

From Hubble’s vantage, space is a crowded place