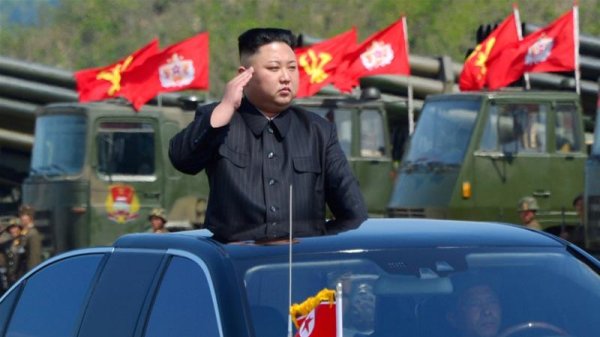 North Korea said on Monday it had successfully launched a new type of ballistic missile in its latest test which it said was aimed at building capacity to launch nuclear missiles.

The North fired a ballistic missile that landed in the sea near Russia on Sunday in a launch that that came just days after South Korea’s new President Moon Jae-in, who has called for closer engagement with the North, was inaugurated in Seoul.

Leader Kim Jong-un personally oversaw the test, it said, and “hugged officials in the field of rocket research, saying that they worked hard to achieve a great thing”.

Kim accused the United States of “browbeating” countries that “have no nukes” and warned Washington not to misjudge the reality that its mainland is in the North’s “sighting range for strike”, KCNA reported.

The missile was launched at the highest angle so as not to affect the security of neighbouring countries and flew 787km reaching an altitude of 2,111.5km, KCNA said.

Experts said the altitude reached by the missile tested meant it was launched at a high trajectory, which would limit the lateral distance it travelled.

But if it was fired at a standard trajectory, it would have a range of at least 4,000km, according to experts.

It “represents a level of performance never before seen from a North Korean missile”, aerospace engineering specialist John Schilling wrote on the respected 38 North website.

“The test-fire aimed at verifying the tactical and technological specifications of the newly developed ballistic rocket capable of carrying a large-size heavy nuclear warhead,” KCNA said.

It appeared to demonstrate an intermediate-range ballistic missile (IRBM) that could “reliably strike the US base at Guam” in the Pacific, he said, and “more importantly, may represent a substantial advance to developing an intercontinental ballistic missile (ICBM)”.

In a statement after the launch, US President Donald Trump’s White House called North Korea a “flagrant menace” and urged “far stronger sanctions” against the isolated nation.

The North says it needs atomic weapons to defend itself against the threat of invasion and has carried out two atomic tests and dozens of missile launches since the beginning of last year.

Tensions on the Korean Peninsula have heightened in recent weeks due to Pyongyang’s nuclear programme and missile tests and threats from Trump that the US could take unilateral action against it in retaliation.

“The timing is particularly significant because South Korea has a new president – testing him is partly what this is about,” Al Jazeera’s Andrew Thomas, reporting from Seoul, said. “This is also a sign that they don’t feel intimidated by Donald Trump,” he added.

“It does seem that this may be a new type of rocket that is being tested – that makes this the most significant launch in at least a year.”