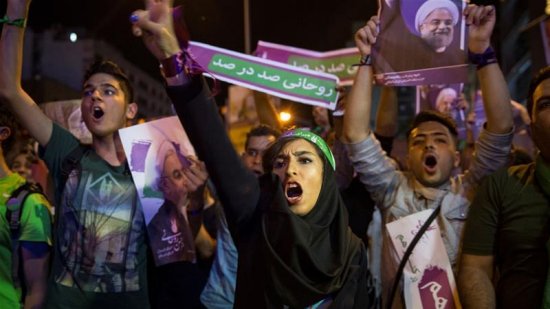 Iran’s Supreme Leader Ayatollah Ali Khamenei has denounced the heated rhetoric of the country’s presidential election campaign, calling it “unworthy”, less than two days before Iranians go to the polls.

With the withdrawal of other candidates, Friday’s election has turned into what is seen as an unexpectedly tight race between incumbent President Hassan Rouhani, of the Reformist bloc, and Ebrahim Raisi, a Principlist cleric and jurist.

The two squared off last week in a fiery televised debate, the third and final such event ahead of the May 19 vote.

“In the election debates, some remarks were made that were unworthy of the Iranian nation. But the [wide] participation of the people will erase all of that,” Khamenei told an audience on Wednesday, according to his website.

While Khamenei did not mention any candidate by name, his criticism appeared to be aimed at Rouhani, who during last week’s debate told his main opponent: “Mr. Raisi, you can slander me as much as you wish. As a judge of the clerical court, you can even issue an arrest order. But please don’t abuse religion for power”.

He also said: “Some security and revolutionary groups are bussing people to your campaign rallies … Who finances them?”

Raisi, who is seen to be very close to Khamenei, had previously attacked Rouhani for failing to deliver promised improvements to the economy.

“Poverty has increased with this government from 23 percent to 33 percent,” said Raisi.

“We must increase direct aid to the poor,” he added, accusing Rouhani’s government of boosting subsidies only at the last minute to grab votes.

Under Iran’s ruling system, Khamenei, who has been in office since 1989, has more authority than the elected president. Yet, the supreme leader is traditionally expected to remain above the fray of day-to-day politics, and Khameini has generally limited his comments about the election to calling for a strong voter turnout.

On Wednesday, the last day of campaigning marked by rallies attended by tens of thousands of supporters of the two main candidates, Khamenei urged voters to head to the polls and send a message to Iran’s adversaries.

Interior Minister Abdolreza Rahmani Fazli said turnout is expected to exceed 70 percent. Some 56.4 million people out of a population of 80 million are eligible to vote.

Fazli said that vote counting would commence after midnight and that the results would be announced “sooner” than in previous elections. In past occasions, results were announced two days later.

Friday’s election will largely serve as a referendum on Rouhani’s outreach to the West, which culminated in the 2015 nuclear deal with world powers.

Under the accord, Iran agreed to limit its enrichment of uranium in exchange for the lifting of some economic sanctions.

Despite the deal, Khamenei remains deeply suspicious of the United States and its intentions towards Iran.

On Wednesday, US President Donald Trump passed up a chance to derail the nuclear deal with Iran and capitalise on his campaign promise to “rip up” the agreement.

Trump had until Thursday to extend a sanctions waiver on Iran. The US state department announced a day earlier it would be signed, meaning old sanctions would not be re-imposed and the nuclear deal will continue – at least for now.

The department also announced the imposition of new unrelated sanctions against Iranian defence officials and an Iranian “entity”. It also pledged to continue reviewing the nuclear deal with withdrawal still possible.

Rouhani has vowed to work towards removing the remaining non-nuclear sanctions, but Hamed Mousavi, a professor at the University of Tehran, told Al Jazeera that the Trump presidency made that promise unlikely.

“With Trump in power in the United States, that seems very doubtful,” Mousavi said.

“The US administration, right now, doesn’t even want to negotiate with Iran. So whether [Rouhani] will be able to lift the even non-nuclear sanctions is more an election promise, than actual policy,” he added.

Al Jazeera’s Jonah Hull, reporting from the capital, Tehran, said Trump’s decision on Wednesday “could be a boost” for Rouhani.

“So much tracks back here to the 2015 deal that so many people placed their hopes of economic progress and re-engagement in the world, but many have found themselves disappointed,” Hull said, pointing to high unemployment rates.

Rouhani’s opponents have criticised him over his economic record, saying his diplomatic efforts have done little to tackle unemployment and poverty.

Unemployment is officially stuck at 12.5 percent – close to 30 percent for the young – and many more are under-employed or struggling to get by.

Raisi has tried to pick up working-class votes by promising more financial support.

Al Jazeera’s Andrew Simmons, reporting from the city of Qom, said those promises have played an important role in the campaign.

“What Raisi is depending on is a surge from those who are underprivileged, those who are poor, those who traditionally go to this camp in Iranian politics, and those assurances by Raisi, whether they can be afforded or not, of handouts to the poor,” Simmons said.

For his part, Rouhani, who took over in 2013, says he needs more time to rebuild an economy that had been shattered by years of sanctions and mismanagement.

“At the halfway point, we don’t turn back,” he told voters.

Besides Rouhani and his Raisi, two other candidates – Mostafa Hashemitaba, a pro-reform figure who previously ran for president in 2001, and Mostafa Mirsalim, a former culture minister – are in the race but are widely expected to drop out before polling begins.