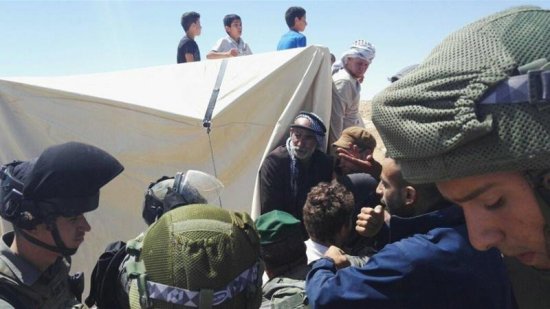 Israeli forces have raided a protest camp in a village in the South Hebron Hills of the occupied West Bank, wounding at least one local resident, detaining one person, and attempting to destroy remaining tents erected by activists, organisers said.

The raid took place on Thursday morning in the village of Sarura, where activists and local landowners set up a protest camp last week to demand that families who were evicted in the 1990s be allowed to return.

Without providing orders or documentation for why they were there, soldiers confiscated equipment used by activists and attempted to remove two shade structures, Issa Amro, the director of the Hebron-based Youth Against Settlements told Al Jazeera by phone.

“[Soldiers] tried to destroy the last tent in the camp, but kids and activists were able to stop them.”

Ashley Bohrer, an American-Jewish activist of the Center for Jewish Nonviolence, told Al Jazeera that soldiers used a “disproportionate amount of force against activists, kicking and shoving us to take the shade structure”.

Video from Thursday’s incident show Israeli soldiers shoving local families and activists as they attempted to remove the remaining tent.

Activists are heard yelling, “there are children on this tent” as soldiers started to remove stakes that were supporting the shade structure.

Bohrer added that a 55-year-old Palestinian man, who owned a cave in the village, was injured by Israeli forces and had to be treated by paramedics.

A Canadian-born man with the Center for Jewish Nonviolence was also detained, Amro said. The activist was later released.

The protest camp was erected by a coalition of Palestinian, Israeli, Jewish and other organisations under the banner “We are Sumud” to call for “an end to the systematic displacement of Palestinians”. Sumud means “steadfastness” in Arabic.

“The main goal is to bring the Palestinian families back so they could return to their homes,” Amro said, emphasising the coalition’s commitment to non-violent resistance.

At least 10 families from Sarura, who mostly lived in caves, were forcibly evicted in 1998 due to settler violence and a military firing zone set up by Israel, according to Amro and a statement by organisers of the demonstration.

The village is located in what the Oslo Accords designated as Area C, which makes up the 60 percent of the occupied West Bank that is under full Israeli control.

Israeli forces had previously raided the camp on Saturday, confiscating tents, generators and tools used by the activists and local families, Amro said.

Sulaiman al-Khatib of Combatants for Peace was also present during Saturday’s raid and told Al Jazeera that soldiers were “aggressive and did not show any papers”.

COGAT, the department of Israel’s defence ministry in charge of the occupied territories, said in an email statement to Al Jazeera that the tent structures “were illegally built and therefore were caught [on Saturday] morning for a second time this week”.

The statement added that “the land in question is a military firing zone, where entry is forbidden”.

Amro said after speaking to families from Sarura, they have decided to continue the protest and rebuild tents and restore caves.

“Nothing will stop us…We will not give up, we will keep fighting and resisting the occupation,” Amro said.

“We will build Sarura again.”

Al-Khatib agreed, saying that activists and local families know “this is a long, long journey, but we won’t stop our Sumud”.