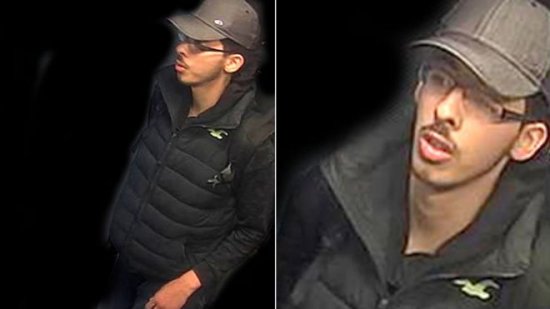 CCTV images showing suicide bomber Salman Abedi on the night he attacked Manchester Arena killing 22 people have been been released by police.

Fourteen locations are being searched and 11 men remain in custody on suspicion of terror offences.

The UK threat level has been reduced from critical to severe and soldiers deployed to support the police will be gradually withdrawn from Monday night.

Prime Minister Theresa May made the announcement after leading a meeting of the government’s emergency committee Cobra on Saturday morning.

Armed police continue to guard hundreds of events across the UK over the bank holiday weekend.

There was increased security at Wembley for the FA Cup Final, Hampden Park for the Scottish Cup Final and Twickenham for the Aviva Premiership Rugby Final.

Hundreds of police were on duty as 50,000 fans attended The Courteeners concert at Old Trafford cricket ground – the first major music event in the city since the bombing.

Additional security measures will be in place for Sunday’s Great Manchester Run, where tens of thousands of runners are expected to participate, including Greater Manchester mayor Andy Burnham.

Other major events on Sunday include the League Two play-off final at Wembley and the second day of Radio 1’s Big Weekend in Hull.

Mrs May said significant activity by the police during the last 24 hours had led to the threat being reduced.

It is unclear where the newly released images of Abedi were taken and from what time on Monday evening.

Greater Manchester Police have made an appeal to the public for information about the bomber’s movements since 18 May, when he returned to the UK.

Police said the investigation – which is “making good progress” – has around 1,000 people working on it and hundreds more officers involved in the security across Greater Manchester.

Officers said they arrested 13 people in Greater Manchester, Warwickshire and Merseyside – but a woman and a 16-year-old boy were later released without charge.

Abedi’s city centre flat was one of the last places he went – and where he may have made the final touches to his explosive device – before going to the arena, police have said.

Seven children were among those who died when the Manchester-born 22-year-old detonated the bomb on Monday night, at the end of a concert by US singer Ariana Grande.

A vigil has been announced for 29-year-old victim Martyn Hett, which will take place at Heaton Moor Park in Stockport on Sunday evening.

And the family of student Georgina Callander, from Lancashire, have said she was “as beautiful on the inside as she was on the outside, with a smile that was never ending. She always had big hugs for everyone and her life was blooming like the flowers she loved”.

In a statement issued through Greater Manchester Police, they said her life was “taken away after 18 short years by evil, evil men prepared to ruin lives and destroy families, for what?”

They added: “I wish I could say that Georgina is one of the last to die in this way but unless our government opens its eyes we know we are only another in a long line of parents on a list that continues to grow.”

A total of 17 warrants have been carried out mainly across Greater Manchester in the last five days.

On Saturday, officers used an explosive device to gain entry to a property in the Cheetham Hill area of Manchester, where two men were arrested.

A joint statement from Chief Constable Ian Hopkins and Neil Basu, senior national co-ordinator from UK Counter Terrorism Policing, said: “This is still a live investigation which is not slowing down.

“Our priorities are to understand the run up to this terrible event and to understand if more people were involved in planning this attack.”