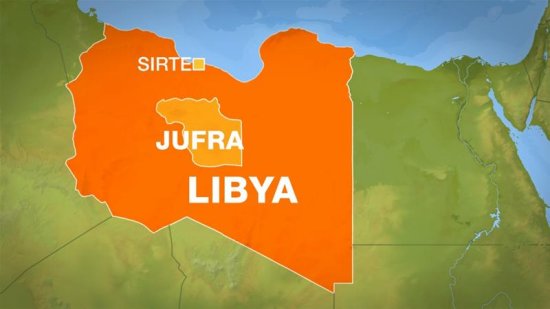 The Bunyan al-Marsous Forces, who support the Tripoli-based GNA, said they were simultaneously attacked on Friday by both Haftar forces and the Islamic State of Iraq and the Levant (ISIL) group in the central district of Jufra, south of Sirte.

The GNA, formed in 2015, has struggled to exert its authority in Tripoli and beyond, or rein in armed groups, including ISIL, that have held power on the ground since the country’s 2011 uprising.

Haftar, a retired army general, is the self-proclaimed commander of the Libyan National Army (LNA).

“Fresh fighting has erupted between forces loyal to renegade commander Khalifa Haftar and forces loyal to the UN-backed GNA, helped by the Benghazi Defence Brigades in the area of al-Jufra in the central desert of Libya,” Al Jazeera’s Mahmoud Abdelwahed, reporting from Tripoli, said.

Jufra is about 400km to the south of Sirte.

He said warplanes, believed to be Egyptian, targeted 14 locations in Jufra overnight on Thursday, “including several residential areas and the Jufra air base used by the UN-backed GNA forces”.

While there were no reports of casualties in the raids, our correspondent said the air raids had caused heavy material losses to GNA military points and installations.

“The Bunyan Marsous Forces that were targeted by Egypt last night were the same forces that defeated ISIL in Sirte last year,” he said.

Egyptian jets carried out raids targeting ISIL camps in the Libyan port city of Derna, where men responsible for a deadly attack on Christians in Egypt were believed to have trained.

Egyptian President Abdel Fattah el-Sisi announced on Friday that he had directed strikes against what he called “terrorist camps”, declaring in a televised address that states that sponsored terrorism would be punished.

“Egypt will never hesitate to strike terror camps anywhere … if it plans attacking Egypt whether inside or outside the country,” Sisi said.

The Egyptian government said at least 29 Coptic Christians were killed and dozens more wounded by armed men who attacked them while they were travelling to a monastery in Egypt’s Minya province.

In the last two years, Egyptian air force has carried out several strikes on Derna, notably in February 2015 and March 2016, which killed women and children.