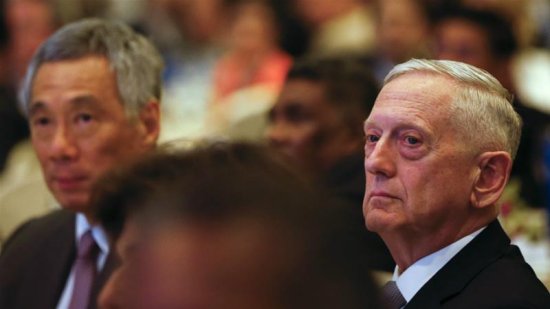 North Korea is accelerating its push to acquire a nuclear-armed missile capable of threatening the United States and other nations, and the US regards this as a “clear and present danger”, US defence chief James Mattis said on Saturday.

Speaking at an international security conference in Singapore, Mattis noted the Pentagon conducted what it called a successful test this week of its missile defence system, which is being developed mainly with North Korea in mind.

An interceptor launched from coastal California soared over the Pacific on Tuesday, scoring what officials called a direct hit on a target missile fired from a Pacific test range. It was the first time the system had been tested against a missile of intercontinental range.

“North Korea’s continued pursuit of nuclear weapons and the means to deliver them is not new, but the regime has increased the pace and scope of its efforts,” said Mattis.

“While the North Korean regime has a long record of murder of diplomats, of kidnapping, killing of sailors, and criminal activity, its nuclear weapons programme is a threat to all. As a matter of national security, the United States regards the threat from North Korea as a clear and present danger.”

While the resolution will impose a global travel ban and asset freeze on a range of North Koreans – including the man believed to head its overseas espionage operations and foreign intelligence collection – it will not target critical oil deliveries, a measure the Trump administration was seeking to step up pressure on Pyongyang.

In a tough speech after the vote, US Ambassador Nikki Haley said “the Security Council is sending a clear message to North Korea today: Stop firing ballistic missiles or face the consequences”.

While she said the US wants a negotiated solution to the North’s nuclear programme and isn’t seeking regime change, she reiterated “all options for responding to future provocations remain on the table”.

Haley urged all countries to break diplomatic ties with North Korea, stop illegal trade and do more to break up smuggling rings and cut off funding for the country’s nuclear and missile programmes.

“Beyond diplomatic and financial consequences, the United States remains prepared to counteract North Korean aggression through other means, if necessary,” she said.

By contrast, China’s UN Ambassador Liu Jieyi stressed the resolution reiterated the importance of maintaining peace and security on the Korean peninsula and Northeast Asia, and expressed the council’s commitment to a peaceful diplomatic and political solution, and to the importance of reducing tensions.

“The current situation on the peninsula is complex and sensitive,” he said. “At the same time, there is a critical window of opportunity for the nuclear issue of the peninsula to come back to the right path of seeking a settlement through dialogue and negotiations.”

Liu said China was calling on all parties to implement the resolution and “strive for a peaceful settlement of the nuclear issue” by strengthening efforts to denuclearise the Korean peninsula and promote peace and dialogue.

He reiterated China’s proposal for North Korea to suspend its nuclear and missile activities in exchange for a suspension of massive military exercises by the United States and South Korea.

In addition to the foreign intelligence chief, the resolution imposes sanctions on officials who control the media and key government and military appointments.