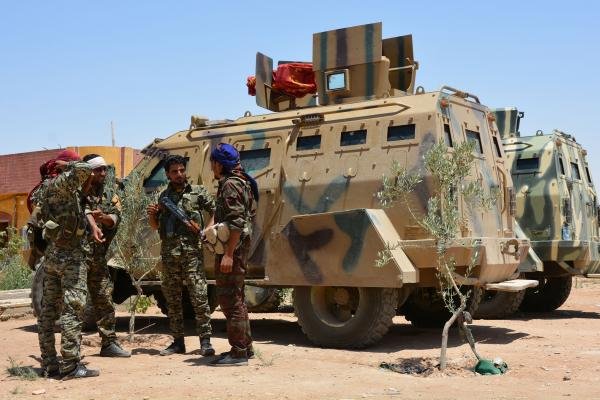 A U.S.-backed militia seized the western district of Raqqa from the Islamic State, two days after taking an eastern part of the city.

Syrian Democratic Forces said in a statement their fighters had “liberated the neighborhood of al-Romaniya on the western front of Raqqa, after two days of continued clashes.”

The Islamic State has considered Raqqa its defacto capital since capturing the city in 2014.

The fighting and bombing from the U.S.-backed coalition killed at least 12 Islamic State fights in al-Romaniya, the SDF said.

The coalition captured the eastern neighborhood of al-Mishlab within a day of first entering Raqqa. The offensive began Tuesday.

The SDF attacked Division 17 — a former Syrian army base — Saturday night with backing from the U.S.-backed coalition, a monitoring group said.

The Syrian Observatory for Human Rights said explosions shook the city for the sixth day of fighting.

Since November, the SDF, led by the Kurdish YPG armed group, have been encircling Raqqa.

Geert Cappelaere, UNICEF’s regional director, said in a statement Saturday that an estimated 40,000 children were trapped inside the city and enduring extremely dangerous conditions.

Meanwhile, images and reports from witnesses suggest that the coalition has used munitions loaded with white phosphorus, which is not illegal, but is prohibited from use in civilian areas under international law.

Blinding spots of light spreading outward were seen Thursday night over eastern Raqqa. During the day, the images showed low white puffs trailing white smoke. That is what white phosphorus, which can be loaded into artillery shells, looks like.

The images were distributed by the Aamaq news agency of the Islamic State, as well as a monitoring group called Raqqa Is Being Slaughtered Silently.

Coalitions members say they use it legally to create smoke screens to hide troop movements.

A U.S. official told The New York Times that it’s not being used against personnel.

Erdogan vows to stand by ‘Qatari brothers’ amid crisis