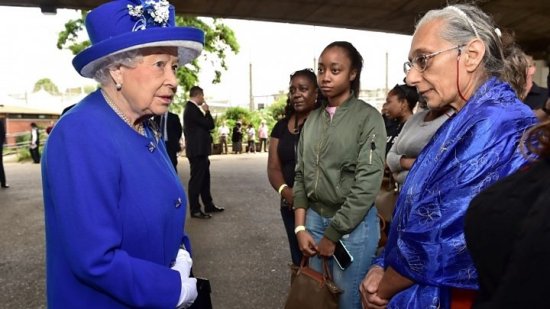 The Queen and Prince William visited a relief centre for Grenfell Tower fire victims, while the missing could number as many as 76, the BBC understands.

Their visit to the Westway Sports Centre comes after police say some of those killed may never be identified.

Police have confirmed that at least 30 people have died as a result of the blaze at the west London flats.

Metropolitan Police Commander Stuart Cundy said that of those who were killed, one died in hospital.

He also said there was nothing to suggest that the fire was started deliberately, and that everyone in hospital has now been identified.

The fire broke out shortly before 01:00 BST on Wednesday.

The Queen and Duke of Cambridge met volunteers, residents and community representatives.

The Queen paid tribute on Thursday to the “bravery” of firefighters and the “incredible generosity” of volunteers now offering support.

Emergency services are to spend a third day searching for bodies in the burnt-out Grenfell Tower in North Kensington.

Fire chiefs say they do not expect to find more survivors. Police have launched a criminal investigation into the fire and PM Theresa May has ordered a public inquiry.

The prime minister – who faced criticism for not meeting survivors of the tragedy on a visit to the scene on Thursday – said the victims “deserve answers”.

Mrs May visited those injured in the fire on Friday morning, and will chair a cross-Whitehall meeting later on how the authorities can help the community recover.

Housing minister Alok Sharma said the government was working with the local authority to ensure that “every single family will be rehoused in the local area”.

But a statement from Kensington and Chelsea Council said, while they were trying to rehouse people in the borough, it is “possible the council will have to explore housing options that may become available in other parts of the capital.”

Six victims of the blaze have been provisionally identified.

However, Commander Cundy has said earlier there was “a risk that sadly we may not be able to identify everybody”.

When previously asked about the number of dead, he said he hoped the death toll would not reach “triple figures”.

The leader of Kensington and Chelsea Council – the authority that owns the tower block – told BBC Two’s Newsnight it would not use the type of cladding fitted to Grenfell Tower on other buildings in the borough.

The cladding – installed on the tower in a recent renovation – has come under scrutiny, with experts saying a more fire resistant type could have been used.