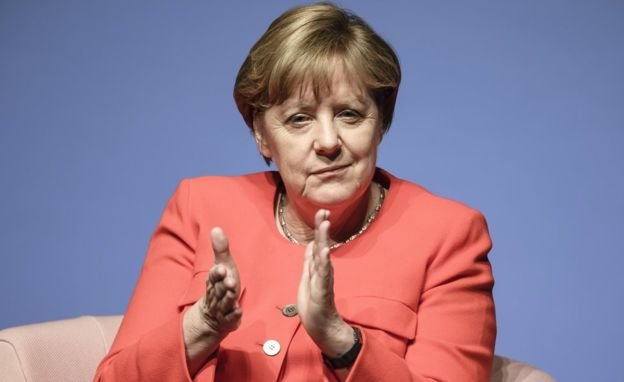 German MPs are pressing Chancellor Angela Merkel for a free vote in parliament soon on legalising same-sex marriage, after she signalled a shift in her party’s position on it.

Mrs Merkel surprised the German media by saying she favoured a “decision of conscience” on gay marriage.

Her conservative Christian Democrats (CDU) have previously opposed it – unlike the opposition Social Democrats (SPD), Free Democrats (FDP) and Greens.

Some want a free vote on it this week.

Mrs Merkel’s comments sparked intense debate on social media, and the hashtag #Ehefüralle (marriage for all) is trending on Twitter.

Many of Germany’s EU partners have legalised gay marriage, notably the Netherlands, Belgium, France, Spain and the UK.

“I’d like to steer the discussion more in the direction of a decision of conscience,” Mrs Merkel said in a Berlin debate organised by the magazine Brigitte.

She said same-sex marriage was “a really personal matter”, so she wanted the CDU and its Bavarian allies, the CSU, “to react differently to this question”. It should not be politicised, she stressed.

Reports say the CDU leadership spent an hour and a half discussing the issue on Sunday night, while preparing its manifesto ahead of Germany’s 24 September parliamentary election.

The opposition parties have set agreement on same-sex marriage as a condition for joining a coalition after the election. Germany is currently governed by a CDU-SPD coalition.

A Twitter message from MPs in the SPD Bundestag (lower house) group said: “Vote now! We say Yes to marriage for all”.

Germany has civil partnerships but the CDU has opposed gay marriage, in order to keep its most conservative supporters loyal and to avoid friction with the CSU, which champions traditional families.

In the 2013 election campaign, Mrs Merkel had expressed reservations about gay marriage, saying: “I’m not sure, as far as the children’s welfare is concerned.”

But in the interview on Monday she described visiting a lesbian couple in her constituency, who are foster parents to eight children. If the state entrusts children to the care of such a couple, she said, “I can no longer argue so simply on the basis of children’s welfare”.