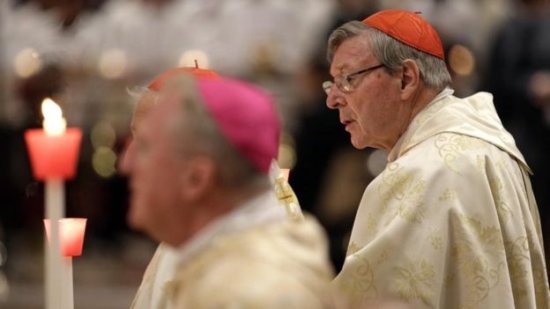 The Vatican treasurer, Cardinal George Pell, has vehemently denied any wrongdoing after being charged with sex offences in his native Australia.

He complained that he had been subjected to “relentless character assassination” during a two-year investigation into the “false” claims.

He said the Pope had granted him a leave of absence to fight the charges.

The charges relate to alleged “historical” incidents, police in the state of Victoria said.

The allegations were made by a number of people, said Police Deputy Commissioner Shane Patton.

Cardinal Pell, 76, who is based in the Vatican, is considered the third-ranking official in the Holy See.

He told a news conference at the Holy See that he would travel to Australia if his doctors permitted it.

“I’m looking forward finally to having my day in court,” he said.

“I am innocent of these charges, they are false. The whole idea of sexual abuse is abhorrent to me.”

The Catholic Church worldwide has in recent years faced a damaging series of allegations relating to sex abuse by priests, and claims that these cases were covered up.

The BBC’s James Reynolds says the charges leave the Church – and the Pope – in an uncomfortable position.

After his election in 2013, Pope Francis created a commission to deal with allegations of sexual abuse by clerics. Now he finds that one of his closest advisers faces charges of his own.

In a statement following the announcement of the charges, the Vatican said: “The Holy See expresses its respect for the Australian justice system that will have to decide the merits of the questions raised.

“At the same time, it is important to recall that Cardinal Pell has openly and repeatedly condemned as immoral and intolerable the acts of abuse committed against minors; has co-operated in the past with Australian authorities… has supported the Pontifical Commission for the Protection of Minors; and finally, as a diocesan bishop in Australia, has introduced systems and procedures both for the protection of minors and to provide assistance to victims of abuse.”

Victoria Police said they had made the decision to charge Cardinal Pell after receiving advice from prosecutors last month.

The cardinal would be required to face the Melbourne Magistrates’ Court on 18 July, Deputy Commissioner Patton said.

A magistrate will decide next week whether to release the details and the nature of the charges ahead of the cardinal’s court appearance.

Cardinal Pell was questioned by Australian detectives in the Vatican last year after saying he was too unwell to take a long flight to Australia.

Cardinal Pell has been a strong supporter of traditional Catholic values, taking a conservative stance on same-sex marriage and contraception, and advocating priestly celibacy.

But his career has been dogged first by claims that he covered up child sexual abuse by priests, and then later that he was himself an abuser. He has always strongly denied any wrongdoing.

In 2014, Cardinal Pell was summoned to Rome to become chief of the Vatican’s finances, a new position created by Pope Francis in the wake of scandals at the Vatican Bank.

But he left behind growing anger over revelations of child sex abuse by members of the Catholic clergy in Australia.

Cardinal Pell repeatedly faced allegations from abuse victims of a cover-up and his critics accused him of appearing aloof and arrogant.

In 2016 the Australian Broadcasting Corp (ABC) aired allegations by two men who claimed Cardinal Pell had touched them inappropriately in the 1970s.

He strongly denied the allegations, describing them as a “scandalous smear campaign”.

The sexual abuse of children was rarely discussed in public before the 1970s, and it was not until the 1980s that the first cases of molestation by priests came to light, in the US and Canada.

In the 1990s, revelations began of widespread abuse in Ireland and in the new century, more cases of abuse were revealed in more than a dozen countries.

The UN has accused the Vatican of “systematically” adopting policies allowing priests to sexually abuse thousands of children.

Since his election, Pope Francis has appeared to offer new hope to victims, with a call for action on sex abuse in the Church. Under his papacy, a Vatican committee has been set up to fight sexual abuse and help victims.

In a report by Vatican Radio, the Pope asked for forgiveness for the “evil” damage to children caused by sexual abusers in the clergy and said “sanctions” would be imposed.

Vatican officials submitted publicly to questioning for the first time in January 2013, before a UN panel in Geneva, but refused to supply data on abuse cases.

Victims’ groups have responded to almost every move by the Vatican with scepticism.