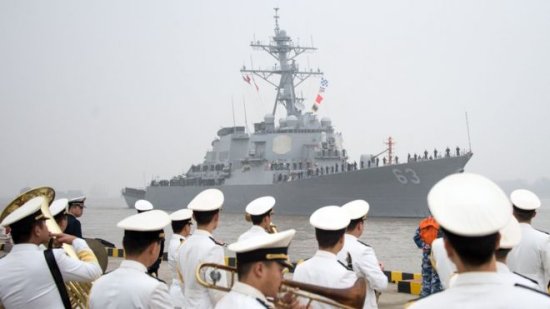 Beijing has called the presence of a US warship near a disputed island in the South China Sea “a serious political and military provocation”.

The USS Stethem sailed close to Triton Island, part of the Paracel Islands archipelago, claimed by China and others.

China responded by sending military vessels and fighter jets to the island.

It happened hours before US President Donald Trump and Chinese counterpart Xi Jinping spoke on the phone.

During the call, Mr Xi told Mr Trump that “negative factors” were affecting US-China relations, according to a read-out of the call carried on Chinese state TV.

A White House statement about their call did not say if they had discussed the incident. It said the leaders had instead “reaffirmed their commitment to a denuclearised Korean peninsula”.

The US has repeatedly warned China against its occupation and aggressive reclamation of islands in disputed waters, but Beijing says it is within its sovereign rights to do so.

In a statement late on Sunday, China’s foreign ministry confirmed reports that the USS Stethem had entered waters claimed by China.

The warship had sailed within 12 nautical miles of Triton Island as part of its “freedom of navigation” operations, according to news agencies and Fox News citing US defence officials.

UN rules dictate that any territory can claim the waters up to 12 nautical miles from its coast. The sailing of a US ship within those limits indicates the US does not recognise those territorial claims.

Beijing said it would use “all necessary means to defend national sovereignty and security”.

It also accused the US of “deliberately stirring up troubles” in the region as China and Southeast Asian neighbours have “cooled down and improved the situation”.

The tiny island is also claimed by Vietnam and Taiwan. China has been embroiled in maritime disputes with several of its regional neighbours in recent years.

The US conducts a programme called “freedom of navigation” which challenges “excessive claims” to the world’s oceans and airspace.

It was developed to ensure all countries adhere to UN maritime rules.

The US State Department says the programme operates through diplomacy, “operational assertions” by the US military, and consultations with other governments.

The military operation is the second since Mr Trump took office. In May, the USS Dewey sailed less than 12 nautical miles from an artificial island built by China called Mischief Reef, which is part of the Spratly Islands.

US Defence Secretary James Mattis said a few days later that the US would not accept China’s militarisation of man-made islands in the region.

In previous years, the US has conducted such operations against China, Malaysia, the Philippines, Taiwan, and Vietnam.Rival countries have wrangled over territory in the South China Sea for centuries, but tension has steadily increased in recent years as Beijing has begun re-asserting its claims.

The area is a major shipping route, and a rich fishing ground, and is thought to have abundant oil and gas reserves.

The various islands and waters are claimed in part or in whole by Taiwan, China, Vietnam, the Philippines, Indonesia, Malaysia and Brunei.

Much of the conflict has been centred on two clusters of islands, the Paracels and Spratlys.

China claims the largest portion of territory, saying its rights go back centuries, and issued a map in 1947 detailing its claims.

Under President Xi Jinping, China has ramped up its territorial assertions, building artificial islands and military facilities on reefs while also carrying out naval patrols in disputed waters.

But China denies the accusations of militarisation, saying the facilities are for civilian and defence purposes.