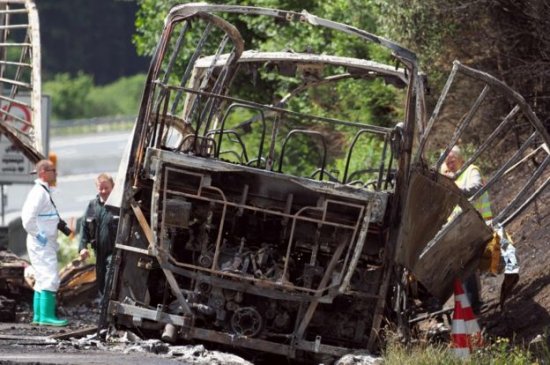 Eighteen people are believed to have died when their tour bus crashed and burst into flames on the A9 motorway in southern Germany, police say.

The bus was in a collision with a lorry near Stammbach in north Bavaria.

Thirty people escaped the fire, two of whom are critically hurt. The bus was carrying German pensioners from Saxony.

Bavarian Interior Minister Joachim Herrmann said rescuers were delayed by “gawpers” driving slowly and by the intensity of the blaze.

It is not clear why the bus crashed – traffic was reportedly moving slowly at the time. Nor is it clear why flames engulfed the whole bus so quickly.

The lorry’s trailer was also incinerated and the burnt-out wreck ended up a short distance ahead of the bus. The German news website Frankenpost reports that it was carrying mattresses and pillows.

The lorry driver was unharmed and told police the bus had crashed into his vehicle and burst into flames, it said.

There were 46 passengers and two drivers on the bus. One driver was among those killed. The passengers were men and women aged 41 to 81, from the Dresden area, heading to Lake Garda in Italy for a holiday.

Forensic teams have recovered the charred remains of 11 people so far.

Chancellor Angela Merkel said she was distressed by the accident and expressed sympathy for the injured and bereaved relatives.

She thanked the rescuers for looking after people “in an appalling situation”.

A police spokesman told German news channel n-tv that there were good medical facilities in Bayreuth, not far from the scene.

Macron seeks to cut number of MPs by a third