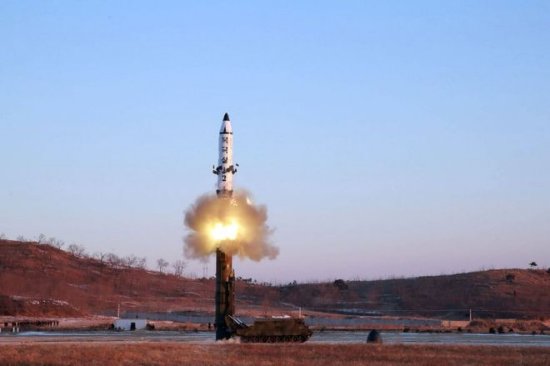 North Korea has fired an intermediate range missile in the direction of Japan, US military officials said.

The land-based missile was fired from near Panghyon airfield, and flew for 37 minutes before landing in the Sea of Japan, said the US Pacific Command.

Pyongyang has increased the frequency of its nuclear and missile tests in recent months, raising tensions.

The missile may have landed in waters claimed by Japan as its exclusive economic zone, according to Japanese officials.

The US said it did not pose a threat to North America.

This is the 11th detected missile launch this year, but its range seems much greater, says the BBC’s Stephen Evans in Seoul.

North Korea last test-launched missiles in May. It fired projectiles on two separate occasions, both towards the Sea of Japan.

Japan has reacted angrily, with chief cabinet secretary Yoshihide Suga telling reporters: “North Korea’s repeated provocations like this are absolutely unacceptable. We lodged a strong protest and condemned it.”

Prime Minister Shinzo Abe said Japan would “unite strongly” with the US and South Korea to put pressure on Pyongyang.

He added that he would call on Chinese President Xi Jinping and Russian President Vladimir Putin – who are meeting in Moscow – “to play a more constructive role”.

US President Donald Trump also responded swiftly on Tuesday to the missile launch.

On his Twitter account he made apparent reference to North Korean leader Kim Jong-un, saying: “Does this guy have anything better to do with his life?”

“Hard to believe that South Korea and Japan will put up with this much longer. Perhaps China will put a heavy move on North Korea and end this nonsense once and for all!”

He has also repeatedly called on Mr Xi to pressure North Korea to end its nuclear and missile programmes. Beijing is Pyongyang’s closest economic ally.

The latest missile launch comes a day after Mr Trump spoke on the phone separately with Mr Xi and Mr Abe about North Korea. The leaders reaffirmed their commitment to a denuclearised Korean Peninsula.

In South Korea, recently-elected President Moon Jae-in has called for an emergency meeting of the country’s security council.

Mr Moon also met with US President Donald Trump last week, with the US leader warning Pyongyang of a “determined response”.