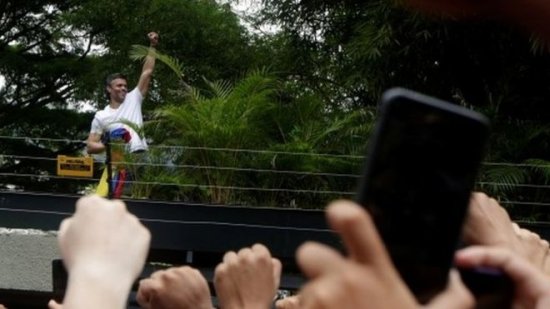 Venezuelan President Nicolás Maduro has praised the decision to release from prison one of the country’s main opposition leaders, Leopoldo Lopez.

Mr Lopez has been moved to house arrest after more than three years in jail.

He left a prison near Caracas and was reunited with his family on Saturday.

Mr Lopez was serving a 14-year sentence for inciting violence during anti-government protests in 2014, a charge he has always denied. The Supreme Court said he was released on health grounds.

Mr Maduro said he “respected” and “supported” the Supreme Court’s decision but called for “a message of peace and rectification” in the country.

Hours after being freed, Mr Lopez urged supporters to continue protesting in the streets against Mr Maduro.

Venezuela’s opposition and international powers have long pressed for his freedom. The head of the Organisation of American States regional bloc, Luis Almagro, said the court’s decision offered an opportunity for national reconciliation.

Henrique Capriles, a former opposition presidential candidate, stressed “he must be given his full liberty together with all political prisoners”, Reuters reported.

Giving a glimpse of his son’s life behind bars, Mr Lopez’s father told Spanish radio “a few days ago they had punished him with solitary confinement without light or water for three days”.

He said his son was now wearing an electronic tag so that the authorities could keep abreast of his movements.

His wife had complained that she had not been allowed to see him for more than a month, but on Friday she tweeted she had been allowed an hour-long meeting.

In May, a government lawmaker published a video of Lopez in his cell following rumours that he had been poisoned and taken to hospital.

In the video, Mr Lopez – a Harvard-educated former mayor who has been prevented by the government from standing for public office – said he was well and did not know why he was being asked to prove he was still alive.

Venezuela has been experiencing a wave of anti-government protests similar to those over which Mr Lopez was jailed.

The opposition is calling for early elections and the release of opposition politicians jailed in recent years, saying the socialist governments of President Maduro and his predecessor, the late Hugo Chavez, have mismanaged the economy since coming to power in 1999.