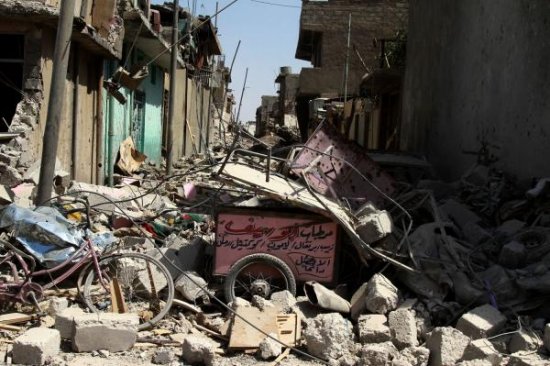 According to multiple earlier reports, an official declaration of victory had been expected. Only a small group of ISIS fighters remain holed up in small section of Mosul’s Old City.

Despite a small holdout of Islamic State fighters, the prime minister, dressed in military garb, greeted and congratulated Iraqi soldiers on their victory.

Over the weekend, the Iraqi army raised the national flag on the bank of the Tigris River in the Old City.

ISIS first seized Mosul in 2014, but Iraqi forces have been chipping away at jihadist control of the city since October of last year. The siege has been backed by U.S.-led coalition airstrikes, but warplanes have dropped fewer bombs in recent days as Iraqi forces inched closer to retaking the city.

In October, when fighting began, there were roughly 6,000 ISIS militants in Mosul. An estimated 300 remain.

Since ISIS took over the city in 2014, nearly a million civilians have fled the city. And the fighting over the last several months has left the city severely damaged.

Many of the residents who have remained in the city are being found in desperate conditions.

“We are seeing more civilians coming across the front line,” reported Al Jazeera’s Charles Stratford. “Horrific stories are being told. Many of them are malnourished and seriously dehydrated. Very many of them are deeply traumatised by the months they’ve spent hiding in their homes.”

With Mosul now retaken, many of the displaced civilians are expected to return, putting pressure on the Iraqi government to begin rebuilding the city in haste. Damage among the western half of the city is extensive.

“The damage in the right bank, compared to the left bank is 30 times more,” said Nofal al-Hammad, governor of Nineveh, a city located on the outskirts of Mosul. “I mean here the destruction of the city’s infrastructure, the houses of the people, and the government offices.”

Iraqi forces still have more ISIS strongholds to take on. The Islamic State remains in control of several towns in Iraq.

“By no means does this seemingly imminent victory by Iraqi forces in Mosul mean the end of ISIL in Iraq,” Stratford said before victory was declared. “There’s still a lot more to do.”

Mosul victory over IS within hours