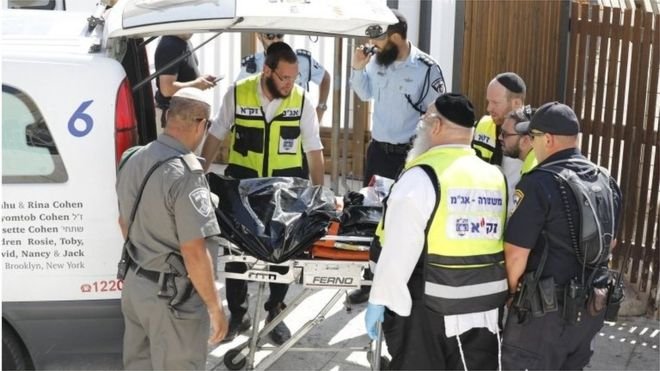 Three Israelis have been injured after attackers opened fire on policemen near a holy site in Jerusalem.

Police say three assailants were killed after the shooting outside the hilltop known to Jews as the Temple Mount and to Muslims as Haram al-Sharif.

Two of the Israeli men hurt are in a critical condition, medics say.

There has been a wave of gun, knife and vehicle attacks on Israelis by Palestinians or Israeli Arabs since late 2015.

Information about the identities of the men who carried out the attack on Friday has not been released.

Police say the gunmen opened fire as they walked from the sacred compound towards the Lions’ Gate area of the Old City walls.

The attackers were then pursued onto the Temple Mount/Haram al-Sharif, where they were shot dead.

In the wake of the incident, police closed the complex, which contains the al-Aqsa Mosque, ahead of Islamic Friday prayers for the first time in years.

The shooting comes weeks after an Israeli policewoman was killed in a knife and gun attack outside the Old City by three Palestinians from the occupied West Bank.

Forty-two Israelis have been killed in nearly two years of such attacks.

Over 240 Palestinians – most of them attackers, Israel says – have also been killed in that period. Others have been killed in clashes with Israeli troops.

Israel says Palestinian incitement has fuelled the attacks. The Palestinian leadership has blamed frustration rooted in decades of Israeli occupation.