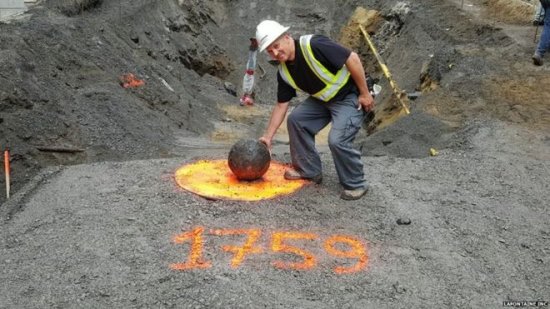 Builders in the old part of the Canadian city of Quebec have unearthed a live cannonball fired by the British during a siege in 1759.

They posed for photos with the large, 90kg projectile, unaware that it was still potentially explosive.

The British besieged Quebec while fighting the French at the Battle of the Plains of Abraham.

Quebec City archaeologist Serge Rouleau, who examined the munition before the army and noticed that it still contained a charge, said it was more an incendiary bomb than a cannonball, Le Soleil news site (in French) reports.

He had taken it home after the builders’ firm, Lafontaine Inc, contacted the municipal authorities.

“The ball would break and the powder would ignite, setting fire to the building,” Master Warrant Officer Sylvain Trudel, a senior munitions technician, was quoted by CBC as saying.

“With time, humidity got into its interior and reduced its potential for exploding, but there’s still a danger,” he added.

“Old munitions like this are hard to predict. You never know to what point the chemicals inside have degraded.”

The cannonball is now at a safe site and will either be disarmed or destroyed if necessary, CBC says.

It is believed it was fired at Quebec City from Levis, across the St Lawrence River, the broadcaster adds.

The Battle of the Plains of Abraham, part of the Seven Years’ War, ended in victory for the British, and was a major milestone towards the end of French rule in what is now Canada.