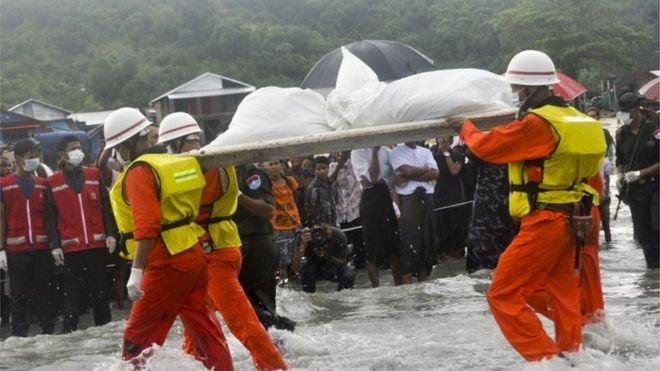 Bad weather caused a military plane to crash in Myanmar last month with 122 people on board, state media say.

The Chinese-made aircraft went down in the Andaman Sea on 7 June with no survivors.

Investigators found the pilot had lost control after entering thick storm cloud. Ice had formed on the wings and sudden crosswinds had led the engine to stall, state media say.

The disaster is among the worst in the country’s aviation history.

The aircraft, a Y-8 transporter made in China, was carrying 14 crew. Most of the passengers were military personnel and family members, including children.

Although it was monsoon season in Myanmar (also called Burma), there were no reports of bad weather at the time.

Communication with the flight was lost half an hour into the short, routine trip.

“The accident occurred due to loss of control after experiencing adverse weather that caused the plane to stall… resulting in a nosedive,” state media said.

After studying black box data, investigators decided the crash was “not from any act of sabotage, explosion or engine failure”.

The plane was flying from Myeik to Yangon and the debris was found in the sea off the coastal town of Dawei.

It remains unclear why the pilot flew into the storm, given that weather radar normally allows such clouds to be avoided.

Myanmar has seen a number of aircraft incidents in recent years: