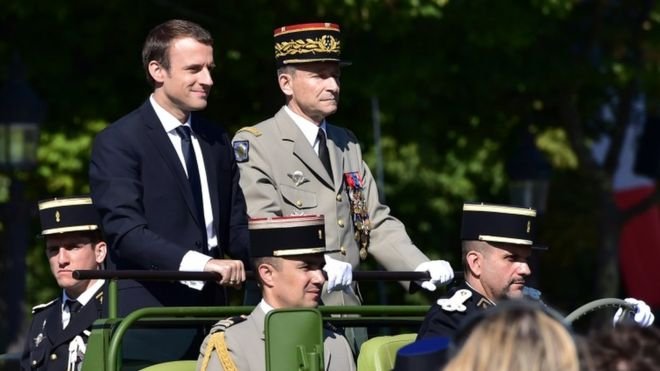 The head of the French armed forces has quit after a clash with President Emmanuel Macron over budget cuts.

Gen Pierre de Villiers said in a statement he could no longer “guarantee the durability of the army model” that he considered necessary to ensure France’s protection.

France’s government last week revealed major cuts to bring its budget deficit below the level of an EU cap.

Mr Macron had said he would not tolerate dissent from the military.

In a speech at the defence ministry last week, he said: “It is not dignified to hold certain debates in the public arena.”

But he had also said the general had his “full trust” as long as he “knows the chain of command and how it works”.

The pair had been scheduled to meet on Friday to try to sort out their differences.

Gen de Villiers told a parliamentary committee last week that the government should not mess with him on the matter, using a far stronger expletive.

The general, who was appointed head of the military in February 2014 and had his tenure extended by Mr Macron in June, had previously spoken out on budget cuts.

Shortly after he took up his role he had threatened to walk out over cuts that were later shelved.

As he announced his resignation on Wednesday, he said he believed it was his duty to tell politicians of his “reservations”.

Former chief of the French armed forces Henri Bentégeat told Le Monde that the president had the right to impose his authority, but added: “The way he did it will leave marks. You can’t publicly question a military leader like that in front of his subordinates.”

Briton and Italian die in beach rescue near Brindisi