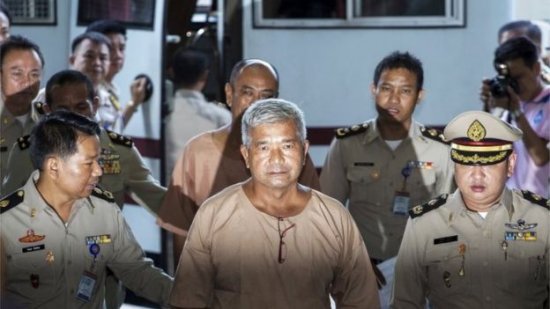 A former Thai general has been sentenced to 27 years in jail for human trafficking at a landmark trial.

Manas Kongpan is among more than 60 people convicted in Bangkok of trafficking Bangladeshis and Rohingya Muslims, a minority fleeing Myanmar.

Another top former official was sentenced to 75 years in prison. More than 100 defendants were on trial.

Muslim Rohingya have been fleeing Myanmar for years, paying people smugglers to help them escape.

The arrest of the general in June 2015, was seen as part of an effort by Thailand to close down a human smuggling route through the country.

The judge found him guilty of human trafficking and organised transnational crime.

A former head of administration in the southern province of Satun, Ko-Tong (also known as Patjuban Aungkachotephan), received a sentence of 75 years in prison.

Several other defendants were handed jail terms of similar length. Sentences ranged from four to 94 years.

In 2015, thousands of refugees were left stranded at sea as they tried to escape through southern Thailand and on to Malaysia and other destinations.

The crisis escalated after international pressure forced the Thai authorities to crack down on the smuggling networks.

This led to the smugglers abandoning the refugees, leaving them on their sea and land routes with no neighbouring country willing to take them in.

The current trial was sparked by the discovery of mass graves of refugees in jungle camps near the Thai-Malaysian border.

Most of those indicted are from Thailand but several citizens of Myanmar (also called Burma) and Bangladesh are also being held.

A senior policeman who led an investigation into human trafficking in Thailand, Major General Paween Pongsirin, fled to Australia fearing his life was in danger from influential figures implicated in trafficking in his country.

The Rohingya – a distinct Muslim ethnic group who are effectively stateless – have been fleeing Myanmar for decades with Thailand, Malaysia and Indonesia the most desired destinations.

While they say they are descendants of Arab traders who have been in the region for generations, Myanmar’s governments insist they are not a genuine ethnic group but rather Bengali migrants.

Among the refugees stranded during the 2015 crisis were also many economic migrants from neighbouring Bangladesh.