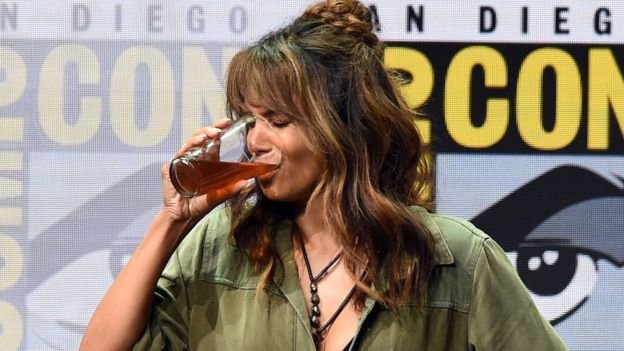 Actress Halle Berry surprised film fans by appearing to drink half a pint of whiskey in one go on stage.

The Oscar winner was promoting her latest film, Kingsman: The Golden Circle, which features a fictional bourbon that serves as a business front for US secret agents.

When it was produced at the Comic-Con event, Berry was poured a large glass which she initially ignored.

But when a fan asked her a difficult question, she chose to drink it.

What was the tough question? She was asked whether her action spy film – which also stars Colin Firth and Taron Egerton – was more British than James Bond.

When Berry said she’d rather drink the whiskey than answer, panel moderator Jonathan Ross led a chant encouraging her to “chug” it.

“Oh I can you know, would you like to see that?” Berry replied and then downed the drink while grimacing and pretended to fall off her chair.

“Kingsman would like to remind you to drink responsibly,” Ross said afterwards, adding: “She’s a professional, she can handle it.”

After the panel, Berry was asked if it was real bourbon she drank.

“Let that be a mystery to the world,” she told Entertainment Tonight. “Never dare a girl like me to do anything, because I just take the challenge.”

The sequel to Matthew Vaughn’s 2014 film, about the recruitment of a young secret agent, was the first big film to kick off Comic-Con in the San Diego Convention Centre’s famous Hall H.

The film’s other stars including Egerton, Firth, Channing Tatum, Jeff Bridges and Pedro Pascal were on hand to talk about the movie and give fans a sneak peek of new footage.

As well as a longer trailer which was released just ahead of the panel, three clips were shown – the opening sequence, the introduction of Tatum as Statesman agent Tequila (the American equivalent to the Kingsmen), and the introduction of Julianne Moore as Poppy, the film’s villain.

The stars also revealed more about their characters, with Tatum saying he “was begging” to have a part in the sequel as he was a fan of the franchise.

Berry said her character, Ginger Ale, was “kind of the techy, brain, nerdy character”, while Firth kept tight-lipped about his role.

Fans of Kingsmen will know the Oscar winner didn’t make it to the end of the first film alive, although he appears in the sequel.

The film is released in cinemas in September.