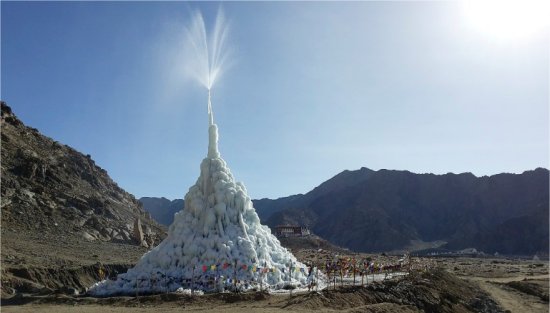 In the far north of India, a cold mountain desert is the stunning backdrop to an unprecedented icy structure.

This is a land of extremes, where rainfall is scarce and temperatures range wildly from torrid to far below freezing.
The locals say it’s the only place in the world where a man, sitting in the sun with his feet in the shade, can suffer sunstroke and frostbite at the same time.
It’s the Ladakh region — meaning “land of high passes” — sandwiched between two of the world’s tallest mountain ranges, the Himalayas and the Kunlun.
Rainfall is rare here. Water, essential for irrigating the farmlands that are the lifeblood of the local population, mostly comes from melting snow and ice.
But climate change is making this land even drier, leaving farmers without water in the crucial planting months of April and May, right before the glaciers start to melt in the summer sun.
One man’s solution to the problem? Make more glaciers.
In 2014 a local mechanical engineer, Sonam Wangchuk, set out to solve the water crisis of the Ladakh.
The natural glaciers are shrinking due to rising global temperatures. For that reason, they provide far less water in early spring but then release a lot in the summer heat, shrinking even more.
Wangchuk had a simple idea: he wanted to balance this natural deficit by collecting water from melting snow and ice in the cold months, which would normally go to waste, and store it until spring, just when farmers need it the most.
“I once saw ice under a bridge in May and understood that it’s the sun that makes the ice melt, not ambient temperature,” he told CNN.
“I realized that ice can last a long time, even at low altitudes.”
He then build a two-story prototype of an “ice stupa”, a cone of ice that he named after the traditional mound-like sacred monuments that are found throughout Asia.
The ice stupa is created using no power or pumps, only physics: “the ingredients are a downstream, an upstream and a gradient,” says Wangchuk.
First, a pipe is laid underground, connecting a stream of water and the location where the ice stupa is required, usually next to a village. The water must come from a higher altitude, usually around 60 meters or more.
Because a fluid in a system always wants to maintain its level, water from 60 meters upstream will spray 60 meters into the air out of the downstream pipe, creating a fountain.
The freezing air temperature does the rest, immediately crystallizing the water droplets into ice that falls right below, forming a cone.
“A cone is very easy to make with ice, because any dripping naturally forms a cone underneath — icicles are inverted cones,” says Wangchuk.
But a cone has more desirable properties: “It has minimal exposed surface area for the volume of water it contains.”
That means it melts very slowly: the prototype, 20 feet tall and containing 150,000 liters of water, lasted from winter until mid-May, just when water is needed for irrigation, while all the surrounding ice on the ground had gone by the end of March.
The revolutionary aspect of the ice stupa is that it works even at low altitude and in very warm temperatures.
It’s not the first type of artificial glacier in the area, but previous endeavors were only attempted above 13,000 feet (or 4,000 meters) by freezing waters in large canals which required shade and a lot of maintenance, and were located too far away from the fields to be practical.
Instead, the conical shape of the ice stupa can withstand even direct sunlight and it can sit right were the water is required.
However, they are not maintenance-free: “Currently they need a lot of manual intervention: the fountains can freeze when the pipes ice up, things like that,” says Wangchuk.
He hopes that soon, by refining the technology, the stupas will become more reliable. That’s why he’s going to start testing in Peru this summer, taking advantage of an extra winter in the southern hemisphere.
“We are at a stage similar to motor cars in the 1950s, when drivers had to often open the bonnet and fix things. Nowadays the driver doesn’t even know what’s inside the bonnet, we are moving towards that,” he says.
“In the meantime, we can grow trees where trees would never grow because the land was too dry.”
How much does it cost to build an ice stupa?
Because of the piping infrastructure required, the initial investment can be steep. Wangchuck estimated he would need around $125,000 to build his first full-scale version, which could reach 80 feet in height and provide irrigation to about 10 hectares of land: “It was too radical for any government to support, but I knew the people of the world would back it,” he says.
He decided to crowdfund the project, asking people for contributions through Indiegogo, a popular crowdfunding platform. The campaign was successful and piqued the interest of the local institutions: “Now that the idea has been proven, the Ladhaki government is incorporating it its development plans.”
The ice stupa also netted Wangchuk a Rolex Award for Enterprise in 2016, which carried a 100,000 Swiss Franc prize (around $105,000).
But Wangchuk also dreams of turning the stupas into tourist attractions, by building ice bars and ice hotels inside them: “It will be an exclusive experience for people who are willing to pay for it, and the money will support the water for the farmers eliminating the shortage in the spring, which is what every farmer fears,” he says.
This might sound a bit like mixing the sacred and the profane, but Wangchuk thinks the ice stupa itself is a bridge between different cultures.
“We wanted to integrate traditional practices and beliefs with innovative technology, because climate change cannot be handled by engineering alone,” he says.
“We have to join forces.”
CNN
Related Topics:Artificial glacierTravel
Up Next