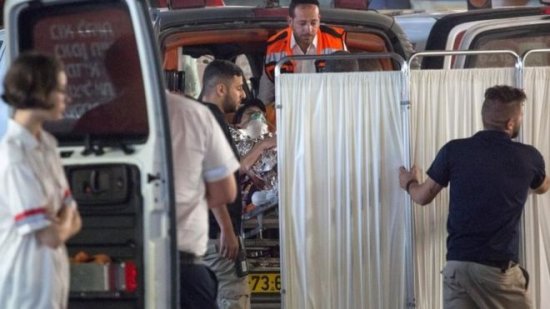 Three Israeli civilians have been stabbed to death in a settlement near Ramallah in the occupied West Bank.

Another Israeli was wounded in the attack in Halamish. The Israeli army says the attacker was shot and caught.

The attack came near the end of a day of clashes between Palestinians and Israeli forces over new security measures at a Jerusalem holy site.

Three Palestinians were killed and hundreds were hurt in East Jerusalem and the West Bank.

Palestinian President Mahmoud Abbas has said he is freezing all contacts with Israel after it installed metal detectors at the site, known to Muslims as Haram al-Sharif and to Jews as the Temple Mount.

Israel says the extra security is needed after two Israeli policemen were killed near the site a week ago.

On Friday, four Israeli civilians were stabbed in Halamish (also known as Neve Tsuf) after “an assailant infiltrated a private home”, the Israeli army said.

Israeli media reported the victims were a man in his sixties and his son and daughter, both in their forties. Another woman in her sixties is being treated in hospital for injuries sustained in the incident.

The Israeli army said the attacker was a young Palestinian man called Omar al-Abed, who hours before the attack, posted on Facebook linking his actions to events at Jerusalem’s holy site.

He was shot by a neighbour – who was a soldier with the Israeli Defense Forces – and taken to hospital, but his condition was unclear.

His house was raided on Saturday, and his brother “apprehended”, the military said.

Defence Minister Avigdor Lieberman also said they were taking steps to prepare the Palestinian attacker’s house for demolition – a measure regularly taken by Israel, which says it is a deterrent, but condemned by rights groups as collective punishment.

There has been a wave of stabbings, shootings and car-rammings of Israelis predominantly by Palestinians or Israeli Arabs since late 2015.

At least 47 Israelis and five foreign nationals have been killed in nearly two years of such attacks.

At least 255 Palestinians – most of them attackers, Israel says – have also been killed in that period, news agencies report. Others have been killed in clashes with Israeli troops.

Israel says Palestinian incitement has fuelled the attacks. The Palestinian leadership has blamed frustration rooted in decades of Israeli occupation.