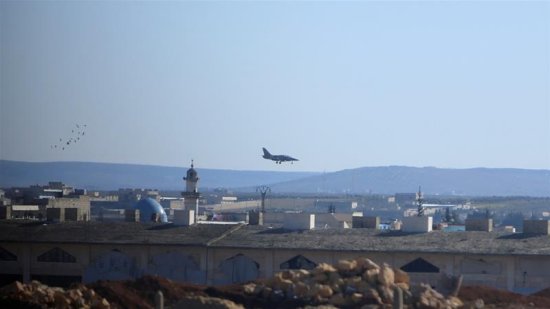 Syrian government forces have carried out several air strikes in the Eastern Ghouta area outside of Damascus, a day after the Syrian military declared a cessation of hostilities in the area, according to a UK-based monitor.

The Syrian Observatory for Human Rights (SOHR) said Saturday had been relatively calm after the ceasefire took effect with isolated incidents of shellfire.

But on Sunday, six air strikes hit the towns of Douma and Ain Terma in rebel-held Eastern Ghouta, it said.

Al Jazeera’s Mohammed Jamjoon, reporting from Gaziantep, on the Turkey-Syria border, said the Syrian military released a statement saying that the spirit of the agreement had first been breached by Jaish al-Islam – an armed opposition group.

“This goes to show how difficult it is to try to make these agreements,” he said.

“The cessation of hostilities was signed yesterday but less than 24 hours later the situation is in tatters.”

A statement from the Cairo-based political opposition movement Al-Ghad said the agreement had been reached in Cairo, sponsored by Egypt and Russia and with the involvement of mainstream rebel groups.

There was to be a full ceasefire in Eastern Ghouta, no government forces would enter the area and aid would be allowed in, it said.

Numerous attempts at a lasting ceasefire in western Syria, where rebels have lost ground to government forces and their allies over the last year, have collapsed with both sides trading the blame.

The United States, Russia and Jordan reached a ceasefire and “de-escalation agreement” for southwestern Syria this month, which has reduced violence. That agreement did not include Eastern Ghouta.

Attack at Israeli embassy in Jordan